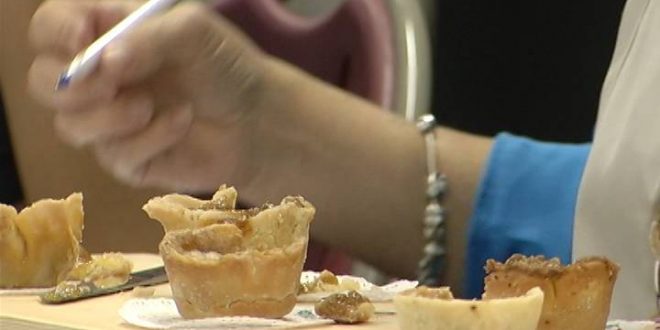 It was a sweet success for Peterborough-area bakers at the fifth annual Butter Tart Taste-off on Saturday in Peterborough.

Held at the Peterborough Farmers’ Market, the event is part of the Butter Tart Tour, Ontario’s largest food tour dedicated to butter tarts. More than 50 bakeries, restaurants, cafés, and resorts from across Kawarthas Northumberland participated.

“We are delighted with this year’s Butter Tart Taste-Off”, said Brenda Wood, Kawarthas Northumberland Butter Tart Tour Executive Director. “It was a great celebration of local food and local talent.

“It’s a real testament to how much Canadians love butter tarts and locally made, locally sourced culinary experiences.”

The event also included Food Network Canada chef David Adjey who hosted an Iron-Chef-Style sous-chef showdown designed to discover the next great culinary talent from the region. The contestants were challenged to use local ingredients from the farmers’ market. The Publican House in Peterborough and Ste. Anne’s Spa in Grafton tied for the win.

Previous Win an Overnight Stay in London this Halloween
Next To show off or switch Off? Travelzoo Survey finds travelers torn between Social Media and desire to disconnect