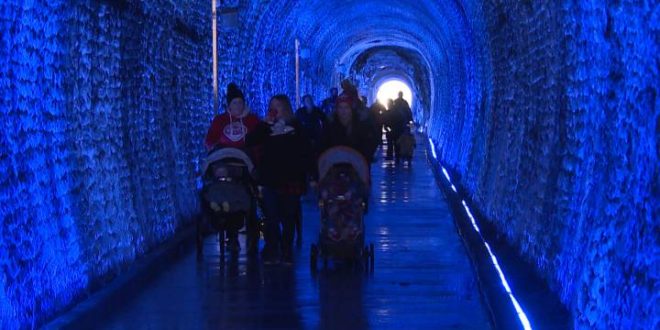 He says he’s happy with the response because the end of March is a slow time in the tourism year.

“There were people from Ottawa, Almonte and all over the place came to go through the tunnel — it’s really pulling people off the 401 as well.”

Growing interest is exactly what tunnel supporters hope will continue.

Since then, it sat derelict until a $4-million plan was put in place to turn it into a tourist attraction.

The budget for the project has now increased to $4.9 million. LeSueur says contractors ran into issues restoring the tunnel.

“The constant dripping of water when they’re trying to repoint the mortar, I guess that was an issue and you know, it’s not a building, it’s a 150-year-old tunnel.”

The project still needs to raise $1.9 million. Fundraising efforts continue and LeSueur says donation boxes are set up at both ends of the tunnel.

In the three months the tunnel was open last year, visitors deposited $10,000 in the donation boxes. LeSueur expects with a full tourist season, they can raise $25,000 this year.

“There’s the escape room going into the caboose right outside the tunnel here. It’s really phenomenal, I can’t wait to see what else other people come up with.”

LeSueur says attractions like the tunnel and the Aquatarium are building that critical mass that’s not only drawing tourists but tourism service providers.

” We have two or three hotels looking at expanding and building. We also have had two bed and breakfasts open last year and another one this year.”

Long-term plans for the tunnel include further development of three acres at the north end of the tunnel and an electric trolley system.

“It’s a hop on, hop off train and eventually, it would pick people off of buses at the north end, drive them through and around downtown.”

LeSueur says they plan to have the trolley up and running sometime in 2019.