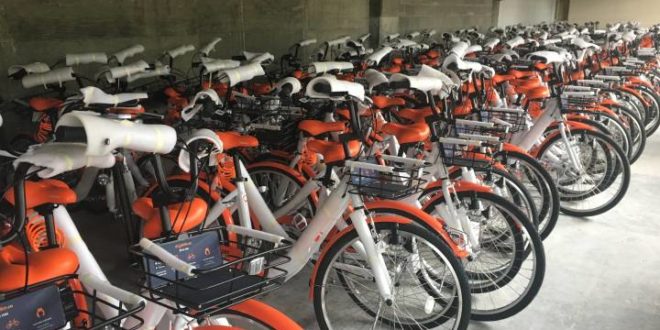 The City of Edmonton has unveiled its preferred plan to introduce a bike share system where rental bikes could be operating as early as this spring.

City council’s Urban Planning Committee will review a new report Tuesday that recommends city staff set guidelines, then have the private sector run things. The report rejected the idea of licensing a single private operator, or having the city run it itself.

Ian O’Donnell with the Downtown Business Association has had to disappoint a lot of visitors.

“We get calls quite often from folks that are at hotels that say ‘where is the nearest place to rent a bike, or a bike share?’ and I have to tell them you can’t find it very easily. They are there. You can rent bikes, but it’s not intuitive and not something you can do on a whim.”

WATCH BELOW: A look at the DropBike bicycle sharing program in Kelowna. Is it here to stay?

He said rental bikes will allow visitors to get out and see more of the city.

“Instead of just perhaps walking that two or three blocks around your hotel, you might go explore the river valley, Old Strathcona, Downtown, 124 street, Chinatown. It sort of really expands the offerings and the experience for people.”

If the plan is approved, it’ll happen before the next phase of separated bike lanes in the expanding grid will be in place. However Cherie Klassen, the executive director of the Old Strathcona Business Association, sees that as a good thing.

“It makes a lot of sense to even put the bike share in now and not wait for the entire grid to be completed,” she said. “There’s a lot of data that actually comes out of bike share systems as well. They actually help educate and inform where people are already biking and maybe you educate your systems of building the bike network around what people are already doing.”

Staff reviewed bike share plans in two Canadian centres, in Kelowna and Kingston, as well as Seattle and Dallas in the U.S., picking up on how regulated the system should be.

WATCH BELOW: The company behind Calgary’s first bike-share program is calling week one a success, but winter is coming. Michael King filed this report in November 2018.

Klassen said she shared her experience with city planners when the proposal was still in its concept stage last fall.

“I actually had an experience with a bike share program when I was in Kelowna this summer as a tourist, and it was really, really easy to use. We biked around all through downtown and the heritage district and I found it fantastic. We didn’t have to really hop in our car at all.”

The city opted for the permitting option because costs would be kept to a minimum and covered by the revenue from the permits issued to the private operators.