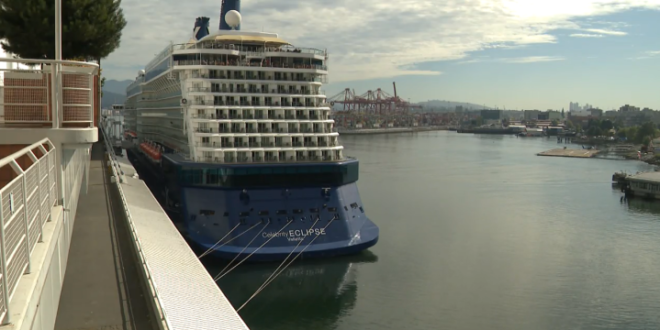 Passengers on an Alaska-bound cruise ship finally got underway Monday, nearly a full day behind schedule, after issues caused by a labour dispute involving a tugboat company.

The Celebrity Eclipse missed its 4 p.m. Sunday departure time from the Port of Vancouver because it was attached to a barge whose crew refused to remove it.

Just after 12:30, Celebrity Cruises announced it was getting underway and thanked passengers for their patience.

The company said it was doing “everything in our power to make up for the lost time,” but that it would drop a stop at Icy Strait from its itinerary.

Passengers would get an onboard credit equal to 1.5 days, it added.

The cruise line’s social media accounts were filled with complaints from people saying they were stuck on the ship.

Passenger Julie Chevola from New York said despite the delay, passengers were not allowed to get off the boat while it remained moored.

“We’re bummed. I mean I’ve been looking forward to this for quite some time. It’s my 60th birthday, my boyfriend’s birthday is tomorrow. We thought we were going to be celebrating in Alaska,” she said.

“People have come from as far as England and they’re first time cruisers — they’re kind of hesitant about going back on another cruise, and I don’t blame them.”

Passenger Derek Williamson from Gilbert, Ariz., told Global News his party of six was taking the delay in stride.

“We’re just hanging out. Just pretending we’re on the sea,” he said by phone from his cabin balcony.

He said he’d only start to worry if major stops were dropped from the route.

“The plan was to be catching salmon, big, big giant salmon,” he said.

The Canadian Merchant Service Guild began job action on all 30 Seaspan tugs in the province Thursday after it said contract negotiations reached an impasse.

Seaspan said a different contractor it had hired to bring the barge in after job action began delivered it on Sunday but that its unionized members refused to remove it in solidarity with the striking group.

Eventually the contract workers agreed to tug the barge out.

“It is unfortunate that the job action by CMSG workers has caused other union workers to refuse work that has resulted in delays to vessels and in some cases, passengers,” the company said in a statement.

“Seaspan values its employees and the communities in which we operate and are committed to treating all employees fairly and maintaining a strong, capable workforce.”

He said it is another blow to the industry, along with airport delays, issues around the ArriveCAN app and the loss of two seasons during the pandemic.

“Cruises didn’t happen at all out of Canadian ports in more than two years,” he said.

“This labour disruption is just one more bump in the road or bit of choppy water that we’ve encountered in the season so far.”

Penner said the good news was that the 2022 season has seen more vessels call on the Port of Vancouver than all of 2019, but that passenger number are still lower than the last pre-COVID season.