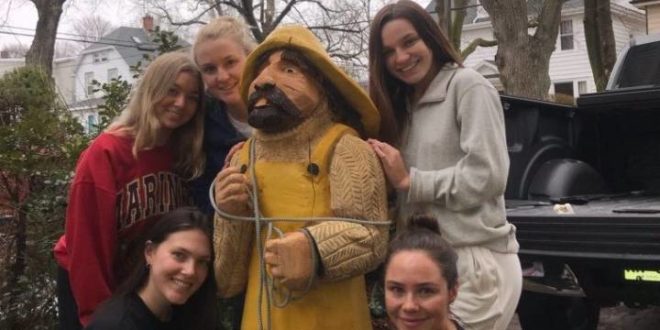 A pint-sized statue of a Nova Scotia fisherman is back in its rightful location at Peggy’s Cove — all thanks to a group of heroic Dalhousie University students.

Shorty, a wide-eyed, 5’2″ wooden fisherman, was stolen from outside a tourist spot in Peggy’s Cove, N.S., earlier this week.

Erin O’Connor and friends Roz Brenzel, Kennedy Whelan, Paula Munroe, and Julia Farrow had heard rumors that a statue had been stolen and was being stored at a nearby home in Halifax.

When they saw reports that Shorty had gone missing from Peggy’s Cove they put two and two together, making a plan to take the statue back for owner Peter Richardson, who operates several businesses in the tourist area, including Peggy’s Cove Lobsters.

Richardson bought Shorty for $1,000 to draw customers to his lobster-roll food truck.

The group located the statue in the home and once they verified it was Shorty, loaded it up into a truck and drove away.

The friends called Richardson soon after, posing for a few photos with the statue before they handed it over.

He plans to secure Shorty to the ground to prevent thefts in the future and has also commissioned a “Mrs. Shorty” in order to make sure the adventurous fisherman doesn’t wander off.

With files from Whitney Middleton-Oickle and The Canadian Press