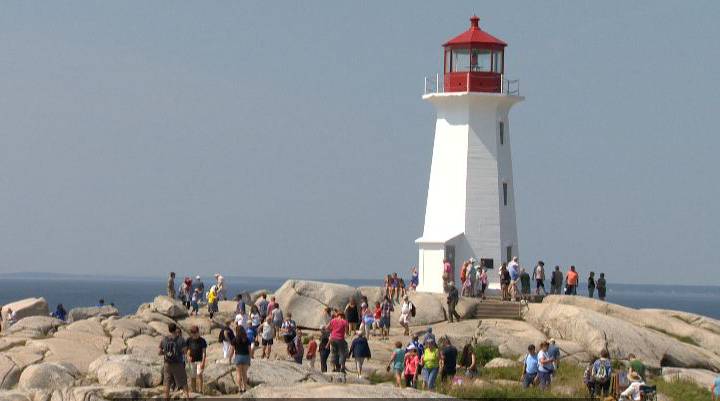 Iconic Peggy’s Cove seeing an increase in tourism in 2017

Peggy’s Cove is home to one of the most photographed lighthouses in the country and it is a popular destination for visitors to Nova Scotia.

So far this year, tourism across the province is up, including at the iconic Peggy’s Cove.

“Our B&B here, Breakwater Inn, is up: we’re at 100 per cent full the month of August. Last year we were about 75 per cent,” said Peter Richardson, captain of Peggy’s Cove Boat Tours.

Richardson says business has been booming this year.

“It means I got to get a bigger boat,” he said laughing. “We’re doing very well here this year. The bookings have come in, online bookings are up this year and just walk-ons. Most of our business is walk-ons here and it’s done really well.”

Neil Depew has been selling artwork at the famous cove for two decades. For the first time in 10 years, Depew says his sales have gone up.

Business at the Sou’Wester Resturant and Gift Shop is up 10 per cent this year.

While the increase in visitors is good, owner John Campbell says the area doesn’t have the infrastructure they need for how many people are coming to Peggy’s Cove.

“We need some pedestrian walkways. We need, probably, more washrooms and we need the infrastructure for the amount of people that come here. The good news is that the government did announce, pre-election, they were going to spend some money on tourist locations so hopefully Peggy’s Cove will get in there too,” he said.

Previous Biometrics and Travel: Promoting the adoption of mobile payments for passengers
Next Wichita Has a Bright Future as a Road Trip Destination