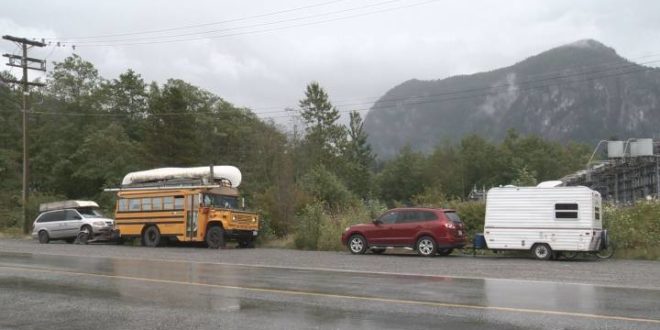 The Squamish resident has been living in a van for the past 20 years, and lately she says she is getting harassed more and more by district officials and getting chased away from parking spots where she has stopped for the night.

Now thanks to a soon-to-be-passed bylaw, she faces the additional possibility of huge fines.

Under the bylaw, the District of Squamish will have the ability to levy fines for illegal campers on Crown land up to $10,000. Pidgeon says it’s not going to make her budge.

“I am not going to move, this is home, this is where the best climbing in Canada is,” she said. “But I don’t like the principle of blocking Crown land. It’s public land, and everyone should be able to access it.”

Pidgeon is one of the thousands of people who identify as “van dwellers”: nomads who have chosen to live off the grid in pursuit of a less cluttered lifestyle.

In Squamish, there are hundreds of people who consider themselves locals. They camp out on main streets, or along forest service roads, without paying rent.

They have drawn the ire of more traditional homeowners who believe the vans are an eyesore, and the people inside are taking up resources from the rest of the community.

There has always been a contingent of van dwellers in Squamish, most of them climbers. But the number of vans parked along the forest service roads or in town has steadily grown.

According to Mayor Karen Elliott, there will be an estimated 3,000 vans in Squamish over the summer, with most of them belonging to tourists.

That’s who this bylaw is aimed at, she says, although she understands there are dozens of locals who live this way, many of whom are working and who simply can’t afford the increasing rents in the area.

“This bylaw gives our bylaw officers the ability to move people off of Crown land within the district, but we have had ongoing discussions with people about this complex issue,” Elliot said.

“There are truly homeless, or people at risk of becoming homeless, that are living in vans and we don’t want to harass them. We want to build more stable housing instead. And we have heard from the business community. Many of the young employees in town are living in vans because they can’t afford to live anywhere else.”

While the bylaw passed first reading unanimously, it is being held until the end of July to pass second and third reading in order for greater consultation from local residents who say they have been excluded from the dialogue.

A new advocacy group was launched this year called Vehicle Dwellers of Squamish, which has been working with the council to help create space for legitimate local residents.

Member Rufio West would like to see a permitting system put in place where people might be charged a nominal fee in exchange for a safe place to park.

“If the district pushes us farther down the service roads with this bylaw, I fear a lot of campers may end up crowding the city centre.  People don’t know where else to go,” said West.

Even targeting the tourists that use a van as a mobile home is a risky proposition, as the district relies on tourism for a great deal of its economic activity.

A recent economic impact assessment showed $10 million was injected into the community just from mountain biking this past year.

Balancing the economic interests of the city with a need for some basic rules on camping is proving challenging.

Kirby Brown, general manager of the Sea to Sky Gondola and the head of Tourism Squamish, says the key will be to build sustainable infrastructure for both recreation and local workers.

“Investment is needed to build the infrastructure that will let the tourism sector flourish. We have to maintain a sustainable amount of growth,” said Kirby.

The mayor agrees, saying the current situation is leading to environmental degradation and increasing the risk of forest fires.

She says the bylaw won’t be used to target van dwellers who are discreet, only the people obviously breaking the rules.

“We don’t want to shut down tourism. We want to keep welcoming people to the community, but we are going to ask them to follow some of our rules so it works for everybody,” Elliott said.

Pidgeon thinks vans should be considered a form of housing. She can’t afford to upgrade her vehicle, let alone pay rent in Squamish. Even a cheap camping spot would cost her about half her monthly income.

“At some point, we have to stop putting up more ‘no camping’ signs,” she said. “I feel like the community should accept us.  If you see a van on the street you should just accept that someone lives there. It is affordable housing.”

The second and third readings of the bylaw are expected to be completed by the end of July.