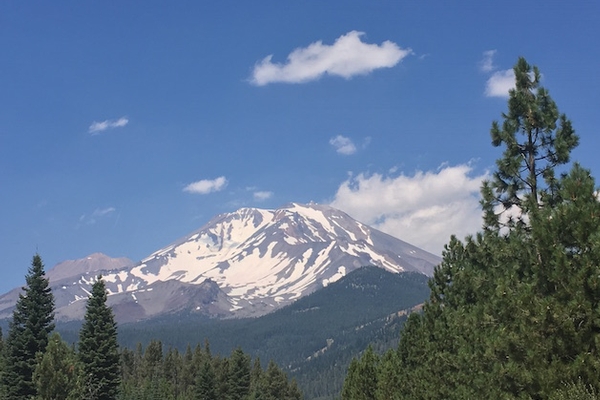 “When I first caught sight of Mount Shasta over the braided folds of the Sacramento Valley” wrote naturalist John Muir in 1874, “my blood turned to wine and I have not been weary since.”

As world travelers, we’re not easily surprised. We love travel, do our research and pretty much have a good notion of what we’ll see and do at each destination we’ve visited.

But on a recent long weekend trip to Northern California’s Mount Shasta region, we were not only surprised, we fell in love with this magnificent, awe-inspiring wild corner of the country—an outdoor lover’s dream.

Gateway to the hub of wilderness and the Shasta-Cascade region is the town of Redding, a perfect base for exploring all the area’s natural wonders. Redding offered a great respite with its many dining and lodging venues after our long days exploring Mother Nature.

Known as the “houseboat capital of the world” Lake Shasta is California’s second-largest after Lake Tahoe.

Our two-hour tour guided tour began at Lake Shasta Caverns Landmark where we boarded a catamaran for a 15-minute scenic cruise across the serene, sky-blue waters of Lake Shasta.

The man-made lake was formed by one of the most impressive engineering marvels of the 20th century—Shasta Dam, the tallest center overflow dam in the world.

Once we disembarked, a 30-passenger bus carried us more than 800 feet up the mountainside with breathtaking views of the lake below enroute to the Shasta Caverns.

Geological dating suggests the caverns formed by flowing waters that are at least 200 million years old. The Wintu Indian tribe’s knowledge of the caverns extends into antiquity. However in 1878, a federal fishery explorer named James A. Richardson recorded his discovery of the cavern on a wall inside the cave with carbide from his miner’s lamp.

In 1964, a tunnel was dug into the cavern enabling visitors to witness its stunning geological formations.  A series of natural limestone caves reveals an underground world of magnificent stalagmites and stalactites studded with crystals, glistening limestone curtains with bacon-like bands of color and  delicately twisted straw-like formations.

The moderate-to-strenuous 60-minute tour (which included a series of 600 stairs) was extremely worthwhile to witness such natural splendor.

The crown jewel of the Cascades, Mount Shasta’s magnificent colossus of four volcanic cones reaches to the heavens, topping out at 14,162 feet. Visible from 100 miles away, the peak is snow-capped even in summer.

Skiing and hiking are popular at this gigantic mountain. Just recently, the Mount Shasta Ski Park chairlifts began running even before ski season begins. We not only experienced gentle breezes and cooling temperatures, we had spectacular birds-eye views of this vast wonderland from above.

A short paved switchback hike from the falls’ observation point led us to more awe-inspiring views from the bottom of the falls. The tall, fern-draped cascade booms over a volcanic-formed edge, tossing mists of water into the air and creating a multitude of rainbows before plummeting into a crystalline turquoise pool below.

Rivulets of whitewater sinuously wind their way down the steep cliff sides framing the falls on both sides. At a chilly 47-degrees, the only ones brave enough to stay in the water were the catch-and-release fly fishermen.

Without a doubt, the biggest surprise was our day visit to Lassen Volcanic National Park.

A dominant feature of the park, Lassen Peak is the largest plug dome volcano in the world. Near the peak, the national park road reaches over 8,500 feet, making it the highest road in the Cascade Mountain Range. The volcano last erupted in 1915 and continued fuming until 1921.

The park is home to pristine mountain lakes, steaming fumaroles and meadows covered with wildflowers. It was shocking to see partially ice-covered lakes, snow covered mountaintops and layers of heavy snowbanks during the mid-August.

Lassen also boasts breathtaking mountain scenery reminiscent of Yosemite and fascinating thermal wonders similar to Yellowstone, all without the crowds of these other popular national parks.

Our hikes led to picturesque bubbling mountain streams, cauldrons of turquoise pools and belching mud pots. We quickly found that one day was not nearly enough to take in all the wonder the amazing park has to offer.

Three spectacular waterfalls within the Shasta Trinity National Forest are all accessible within a short walk of the parking areas. For those who prefer more activity, a 3.8-mile roundtrip hiking trail runs along the fast-flowing McCloud River.

Each spectacular in their own right, the Middle Falls is the quintessential show-stopper. The waterfall at 120 feet is among the widest in California. Rushing waters plummet down 44 feet before gathering in a pool of churning tourmaline waters.

The Upper Falls is the tallest of the three. After river water gets squeezed into a narrow gorge, it picks up speed, traversing down the chasm before crashing over basaltic lava flows to a beautiful swirling lake of water below.

The Lower Falls, though smaller than the others, is still a powerful force of nature. It’s a popular spot for rock jumping and perfect for swimming and sunbathing on its massive surrounding boulders.

Back in the Redding area, breathtaking Whiskeytown Lake in the 39,000-acre Whiskeytown National Recreation Area is a favorite for sailing, swimming and canoeing. Its cool, clear waters teem with fish.

Our two-plus hour ranger-led kayak tour took us to peaceful coves where we saw rare birds such as the acorn woodpecker and osprey while learning about the history, nature and culture of this amazing park. It’s no wonder it’s earned the title of “unofficial capital of kayaking.”

It was a morning of perfect peaceful serenity.

Located on the Sacramento River in Redding, the Sundial Bridge is one of California’s most unusual icons. World-famous Spanish architect for the Athens Olympics Stadium, Santiago Calatrava, designed the 710-foot pedestrian bridge.

Its walking surface is translucent glass, and the bridge spans the river with no footings in the water leaving the salmon-spawning habitat undisturbed. Rather, an inclined 21-story pylon anchors cables that support the entire bridge, serving as the upright element of the tallest working sundial in the world.

Viewing the bridge at sunset was spectacular.

Multiple trails spiral off the bridge exit, leading to botanical gardens along the river or high up to scenic bluffs. There was no shortage of outdoor activities in our four-day visit to the astoundingly beautiful Shasta Cascade.

Once introduced to this wilderness paradise, however, we only yearned for more.

Previous Better visibility on the way for the Okanagan Connector
Next Rick Steves: A tale of two castles