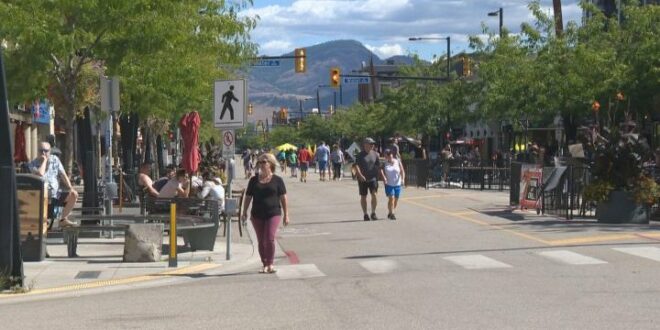 According to the Tourism Industry Association of B.C., 2021 is proving to be a very tough year for tourism across the province.

The slow season follows what was already a tough 2020 when the pandemic curtailed tourism in a major way.

“We have not yet seen the numbers, but, by all indications, it’s actually a worse year than 2020,” said Walt Judas, the association’s CEO.

“Normally we’re a $22.5 billion sector,” Judas told Global News. “Those were the last numbers that were available to us in 2019. Last year, the projection was that we dropped below $7 billion, so it’s a massive hit.”

In the Okanagan, a surge in COVID cases and wildfires contributed to the downturn, according to Judas.

“Between (health) advisories not to travel to the Okanagan, plus the wildfire situation, certainly during the month of August, many operators were hurting,” Judas said.

“They experienced plenty of cancellations and, obviously, a drop in corresponding revenue.”

According to Tourism Kelowna, hotel occupancy in the Central Okanagan city is recovering, but very slowly.

The organization said that in 2019, hotel occupancy was at 66 per cent. That dropped to 41 per cent in 2020 and has increased ever so slightly to 45 per cent so far this year.

At the Modest Butcher Kitchen and Market restaurant in West Kelowna, one of the newest winery restaurants in the Okanagan, operators also saw fewer tourists this past season.

“It was hard for us to tell what it was from, whether it was a bit of COVID, a bit of smoke from forest fires. But the year before, we were brand new and kind of the new shiny penny, so everybody was here,” said Craig McCulloch, vice-president of Mt. Boucherie Estate Winery.

McCulloch hopes tourism organizations do what it takes to restore tourism levels.

“I think we just have to get that out that the Okanagan is great all year round,” he said.

Tourism organizations are strategizing to help bring tourists back.

For the Thompson Okanagan Tourism Association (TOTA), that strategy centres around vaccinations.

“Vaccination is the No. 1 topic that is on our mind, promoting that B.C. is higher than most other provinces,” said Michael J. Ballingall, TOTA’s board chair.

“We think that can lead the charge that British Columbia is a very safe place to come and play and vacation.”

Other strategies include enhancing marketing and restoring air service, but that’s not all.

“We also need to work on reducing the cost of a PCR (Polymerase Chain Reaction) test or at the very least, eliminate the PCR test for people coming from the United States and international countries who have been double vaccinated,” Judas said.

Despite all the efforts being put in to restore tourism levels, officials warn it could take years for a full recovery.

“The build-up will take place over time, well into next year and beyond,” Judas said. “But we’re really not expecting any form of recovery for a number of years.