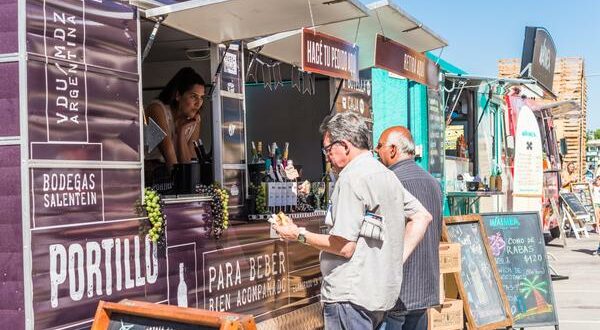 Argentine cuisine has its origins in the culinary traditions of the pre-Columbian Andean and Guaraní civilizations, with later contributions from colonial gastronomy and significant influences from Italian and Spanish cuisine.

Beef is the main protagonist of Argentine cuisine and is accompanied by various salads, potatoes, and rice.

Potatoes and sweet potatoes have been widely used since pre-Columbian times, especially as side dishes. These vegetables are commonly consumed in mashed form, although they are also prepared fried, baked, and even grilled, wrapped in aluminum foil. Other vegetables widely used in the gastronomy of Argentina are tomatoes, lettuce, carrots, and onions, mainly served in salads.

In Argentina’s gastronomy, dairy products have a significant influence, so it is common to find many preparations made with milk and its derivatives. Cheese is widely used, and there are eight types of cheeses typical of the country. Another dairy product commonly used in local pastries and desserts is dulce de leche, a regional product that is a must in most of the country’s delicacies.

The Taste of Argentina

Condiments are also widely used in Argentine cuisine. The most used spices are pepper, hot chili, cumin, and herbs, consumed fresh and dehydrated. They are widely used as flavorings in the country’s typical preparations.

Yanina Martínez, Argentina’s Secretary of Tourism Promotion, highlighted the work of the Country Brand during the presentation of the II Edition Binómico Congreso Gastronómico Iberoamericano. At this event, Argentina will be the guest country, and that will take place from October 24-26, 2022.

“Country Brand is to go out to the world to tell about the richness, the positive attributes that Argentina has, its culture, science, technology, innovation and everything that represents local talent, which is very important and we have to feel proud of it,” said the official.

Martínez added: “We see gastronomy as something fundamental for tourism and that now, post-pandemic, people choose gastronomy, leisure, and enjoy this experience, as a feeling of wellbeing and to get out of this situation where there was an epidemic.”

Yanina Martínez also explained the integral gastronomy plan, on which they are working through Country Brand: “The plan is going to represent Argentine gastronomy as a differential attribute of our country and as a way to achieve the arrival of investments.”

It is a work “linked to the public sector, the private sector, and the different areas related to the gastronomy chain. This activity at the world level is significant for the GDPs of the different countries. It represents a lot of work and the growing economy”. He added that Argentina accompanies the event through the Ibero-American Gastronomy and Food Plan.

Binómico will showcase the gastronomy of the 22 Ibero-American cuisines. As a guest country, Argentina will present presentations by local chefs in the main auditorium and gastronomy workshops during the three days of the event.

Some Typical Foods of Argentina

—Asado or parrillada: this typical Argentinean food consists of beef and entrails cooked on embers.

—Carbonada: this typical meal has its variants depending on the region. Carbonada is usually served in a baked pumpkin, where the filling is made of meat, pumpkin, corn, potatoes, tomatoes, rice, and peaches.

—Locro: is a nutritious stew made from wheat or corn with beans, red sausage, pork, onion, tomato, hot bell pepper, and paprika.

—Empanadas: savory pastries with different fillings (the most famous and consumed are the empanadas filled with meat or ham and cheese). Empanadas can be found fried or baked, with or without spice. The fillings vary according to the region.

—Humita: humita is a thick sauce based on corn, tomato, onion, milk, chili, and paprika. This preparation is distributed in chala leaves, forming a small package tied with strips of the same chala and boiled in salted water.

—Tamales: this typical food consists of a corn dough, which is filled with beef or chicken, wrapped in shallots, and boiled.

Mate: an herbal infusion of Guarani origin prepared with yerba mate leaves that are consumed at all times throughout the country. This typical drink can also be created as tea, in this case, called mate cocido.

Among the most consumed alcoholic beverages in the country is wine, mainly produced in the mountainous provinces. Among the most outstanding Argentine wines is Malbec. In Argentina, there is also a large consumption of beer, with its variants: blonde, black, draft, and others. Imported beers are also consumed.

Coffee consumption is very high. This drink introduced by the Spanish colonization is usually drunk as a snack, also after meals.