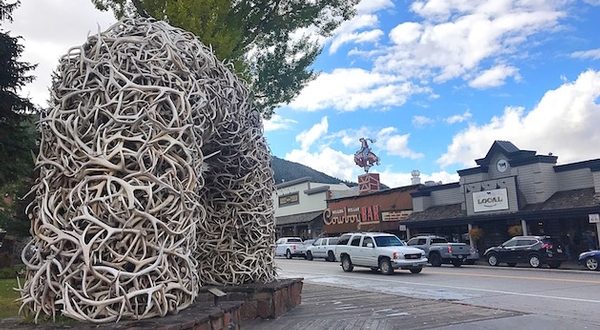 Owly was clearly not impressed with us.

She stared coolly and nonchalantly at the small crowd as we gushed over her magnificence.

A 13-year-old great horned owl, she had piercing yellow eyes; long earlike tufts on the top of her head and resplendent plumage ranging in color from yellow to light brown and black.

This was the closest my five-year-old son or I had ever been to such a remarkable predator, (owls, after all, can take down mammals larger than themselves). It was a fascinating encounter that included learning all about the owl’s ability to turn her head 270 degrees and camouflage herself amid trees.

Owly was just one of several raptors we were introduced to at the Teton Raptor Center, a non-profit just outside Jackson, Wyoming focused on conservation, education and rehabilitation.

During an hour-long show at the center’s 27-acre facility, we also met a Golden Eagle named Gus; Frost, an American Kestrel and Hunter, a Peregrine Falcon.

All of these birds are at the Teton Raptor Center because they’ve been injured in some way and are unable to live on their own in the wild. They now serve as ambassadors, helping the center educate the public about raptors and promote conservation of the birds in the wild.

“The work of the Teton Raptor Center is to keep wild birds in the wild,” Executive Director Amy McCarthy explained. “We are uniquely positioned to help people understand the role of raptors in the ecosystem, to advocate for the health of the places the raptors call home and to provide care to raptors that are unintentionally harmed through human-induced causes.”

Attending an education session at the Teton Raptor Center was one of several memorable experiences during my recent visit to Jackson Hole, Wyoming.

Located between the Teton Mountain Range and the Gros Ventre Range in Wyoming, Jackson Hole is a sweeping valley that long ago was a summer hunting ground for Native Americans.

It later became a magnet for European and American explorers who came to collect beaver pelts.

Today, the breathtaking valley is most widely known as the base camp for travelers coming to visit two iconic national parks – Yellowstone and Grand Tetons.

It’s also a celebrity hotspot thanks to the many luxurious resorts, stellar skiing and the opportunity to be anonymous and get away from it all in the great outdoors.

While many visitors to the area focus on exploring the wildly popular national parks, there’s also a handful of lesser known and smaller offerings in the valley, such as the Teton Raptor Center, that are worth including during a visit, especially if you’re seeking to escape the crowds.

The paintings and sculptures chronicle much of the history of wildlife in art from 2500 B.C. to the present. It’s an engaging and impressive collection that even kids enjoy. As an added bonus, there’s a dedicated, interactive children’s space within the museum that allows young visitors to try on animal costumes, put on puppet shows using animal hand puppets and sketch pictures of animals in an artist’s studio. (Of the museum’s 60,000 annual visitors, 8,000 are children.)

You also don’t want to miss the outdoor sculpture trail. In addition to providing stunning views of the 25,000-acre elk refuge below, the giant animal sculptures along the trail are a big hit with children.

The Indians of the Greater Yellowstone Museum
The greater Yellowstone Valley has a fascinating history tied to Native Americans. The Shoshone and Crow were once the primary inhabitants, but the valley attracted numerous other tribes as well who came to hunt and trade, including the Kiowa and Blackfeet.

The Shoshone held their first Sun Dance, their most sacred ceremony, in Jackson Hole. The Crow creation story takes place along the banks of the Yellowstone and the Kiowa claim to have emerged on earth at a geothermal feature in what is now Yellowstone National Park.

All of this history is detailed in the exhibits at The Indians of the Greater Yellowstone Museum in downtown Jackson. A tiny building, the museum makes the most of its space, filling it with exquisite artifacts from the region’s former Native American inhabitants. Among the many sacred and ceremonial items on display are a Crow war bonnet featuring feathers from a golden eagle; the brass trade beads of a Shoshone leader and a beaded war club decorated with red horse hair.

The museum, operated by the Jackson Hole Historical Society, may not look like much from the outside, but it manages to bring the history of the valley to life in vivid color and detail.

Jackson Hole Playhouse
You know you’ve done something right as a parent when your child is sitting on the edge of his or her seat cheering and applauding.

The Jackson Hole Playhouse is another stop that could easily be overlooked amid the many choices travelers have when visiting the valley. I almost missed it myself. But after two nights of watching streams of people head into the theater and hearing the music from inside as I walked by, I decided I must be missing something.

With that in mind, I purchased front row seats for my son and me to see the season’s last performance of The Unsinkable Molly Brown.

The theater, which specializes in staging westerns and comedies, was small and rustic which made the experience all the more refreshing and engaging. The performances meanwhile were outstanding, as was the singing. Actors and actresses come from all over the country to perform at The Jackson Hole Playhouse.

The theater’s intimate size allowed my son to truly connect with the performers and the performances, which were taking place just a few feet away. As actors danced and sang, twirled and cartwheeled at his feet, my son’s eyes lit up. At the end of each musical number, he cheered wildly. As far as travel experiences with your children go, the evening was a total score.

One last reason the theater is worth a visit – the building dates back to 1915 when it was a livery stable. It is the oldest building in Jackson.