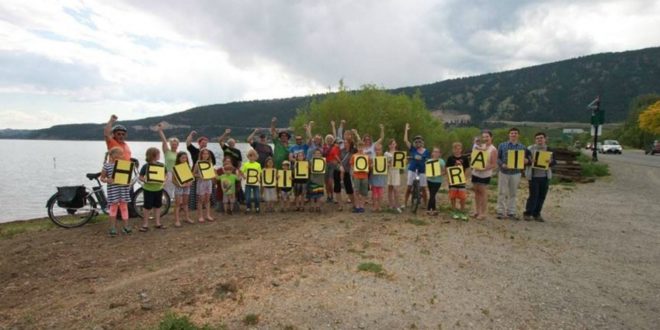 The fundraising campaign has officially begun for the Okanagan Rail Trail as lots of work is needed to see the trail become a reality.

Nearly 50 kilometres of the level route along Kelowna, Lake Country, and the Regional District of the North Okanagan will be redeveloped into a biking and walking route for everyone to use. Before the rail trail can take shape, nearly $8 million in funding will be needed.

With the first planning phase completed, Okanagan Rail Trail Ambassador Brad Clements is excited to see this day come, “The local municipalities and OKIB, with support from the Government of BC, have done their work to secure this property for public use. It is now our turn to step up and make this trail happen.”

The Inter-jurisdictional Development team (IDT) made up of the City of Kelowna, Okanagan Indian Band, District of Lake Country and the North Okanagan Regional District have developed the first phase of the development of the trail.

The first phase of the project will include the construction of a 4.6 m wide compacted, crushed aggregate continuous trail from Coldstream to Kelowna. The cost for this is estimated at $7.86 million. The future phases will include the construction of parking areas, user facilities such as washrooms and picnic areas. The trail could also possibly have an asphalt surface.

“$7.86 million is a lot of money. However, if we each give what we can and encourage our friends, family, and neighbours, to give as well, we can build this trail quickly so that our communities start receiving the benefits. What a legacy we are creating,” said trail ambassador Duane Thomson.

The trail passes by the lakeshore, creeks and other unique natural areas connecting communities, places of work, the YLW airport, UBCO, the Kalamalka Campus of Okanagan College and over 40 recreational and cultural points of interest.

The entire length of the trail spans 48.5 kilometres and has the potential to become a world-class recreation corridor that draws tourists to the region.

All donations are received by the Community Foundation of the North Okanagan and the Central Okanagan Foundation and will go towards the development of the trail in its entirety. Donations can be made online at www.okanaganrailtrail.ca or by contacting one of the Foundations.

“Getting to this target will require a myriad of Trail Ambassadors, Campaign Partners and Business Partners” explained Clements. “It will take a community to build this legacy.”

The trail was purchased for $22 million and has a maximum grade of 1.3 per cent. It is estimated that 588,000 people will use the trail by year five, and that number is expected to increase every year after.

Previous Going long: Shuswap to Osoyoos trail would have global appeal
Next $500,000 grant for New Pathways to Gold Society