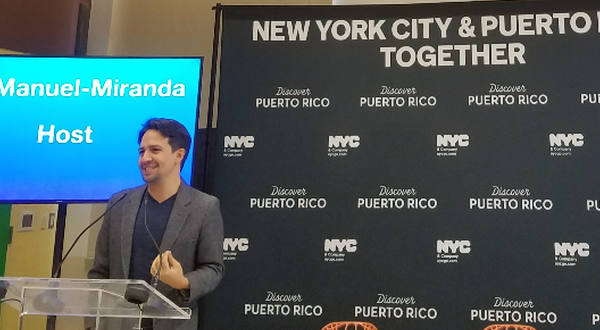 “Hamilton: An American Musical” star Lin-Manuel Miranda was the host for a press conference Tuesday to announce a new partnership between destination marketing organizations in New York City and Puerto Rico.

And TravelPulse was in the room where it happened.

“[Puerto Rico needs] your money, your visit, your support,” said Miranda at the event held at El Museo del Barrio in Manhattan. “Nothing is better for your soul than visiting Puerto Rico.”

Brad Dean, CEO of Discover Puerto Rico, said since both New York City and Puerto Rico have gone through “unimaginable” events in the past, an apparent reference to the September 11, 2001, terrorist attacks, the partnership just made sense.

“We are showing the bond of resilience,” said Dean. “New York understands what it is like to go through something unimaginable. Both destinations have gone through unimaginable circumstances and came out bright and ready to shine.”

So, what is the connection to the Tony Award winner?

Miranda, whose parents are from Puerto Rico, will reprise his role as Alexander Hamilton for a three-week run of the Broadway smash hit play in Puerto Rico. “Hamilton: An American Musical” will run in Puerto Rico from January 8 – 27 at Teatro UPR, located at the heart of the University of Puerto Rico’s main campus in San Juan.

“Hamilton will be great, but that will be for three weeks,” said Miranda. “The relationship between Puerto Rico and New York will be a much longer relationship.”

“Puerto Rico and New York City have so much in common,” said Charles Flateman, board vice chairman of NYC & Company. “Both destinations are rich in design, cuisine and so much more. We wanted to stand together to promote tourism for some time and what better time than today? Puerto Rico is open for business and ready to welcome all.”

The city-island partnership includes a swap of marketing and advertising assets, valued at roughly $300,800.

“This story does not end with Maria,” said Dean.

Previous STR: U.S. hotel performance for September 2018
Next Airlines around the world embrace the need for change in the ancillary revenue services they create