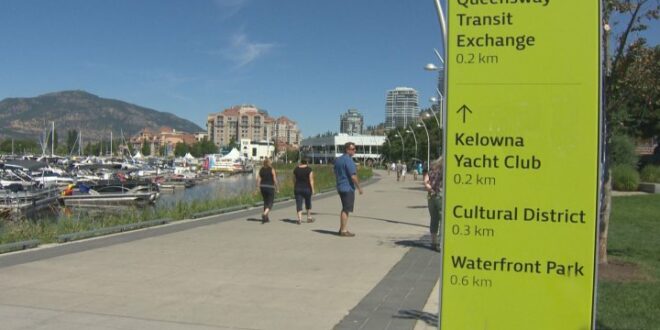 It’s no secret that Kelowna’s tourism industry is vital to its economy. According to Tourism Kelowna, roughly two million visitors come here annually, and pump in over $400 million in direct spending at local businesses.

The president and CEO of the organization says that while the past two years have been difficult on the tourism sector due to COVID restrictions and wildfire smoke, this year is different.

“We’ve had beautiful weather this year and you’re seeing that in our tourism numbers,” explained Tourism Kelowna’s president and CEO, Lisanne Ballantyne

“It could be called a bounce back year, fingers crossed.”

Ballantyne added that despite strong tourism numbers in our city, the rising cost of inflation is having a direct impact on travellers and how they spend their time here.

“Surveys are showing us that if you are a family thinking of going on vacation, you probably are second guessing how long you’re going to stay and how much you’re going to spend once you get there,” details Ballantyne.

“Because of course as inflation and interest rates rise, people’s pocketbooks aren’t stretching as much as they were before.”

Visitors enjoying a sunny Monday afternoon in Kelowna say vacationing here in the summer has come at a noticeably higher cost than in years prior.

“It’s not as free flowing as it once was,” said Edmontonian Darren Broesky.

“It puts a damper on your time and what you can do once you’re down here, obviously you’re spending more money on fuel just to get here.”

Others wandering the city’s streets were shocked by the rapidly rising costs.

“Airfare was a little bit more than it used to be for sure, and I think everything else has also gone up accordingly, maybe 10 to 12 per cent,” said Tony Dawkins.

“Just the parking! We don’t have paid parking where we live so, $25 for three hours is kind of steep for us, and food’s a little bit more expensive,” said Cathy Prichard, a visitor from the Yukon.

Some local restaurants have had to close their doors on certain days due to major staffing shortages, while other establishments like Marmalade Cat Café on Pandosy Street have noticed customers in many cases spending and tipping less.

“I think it has to do with the inflation, also some of the prices have had to go up due to the wage going up so yeah it would make sense,” described Marmalade Cat Café employee, Francisco Merinero.

Despite the impacts of rising inflation being felt right across Canada, there are a number of low-cost options for tourists and locals alike to check out in the Okanagan.

“Try coming in the middle of the week. You’ll find the traffic patterns are very different and the costs are quite different,” said Ballentyne.

“Go into the visitors centre, our team there can tell you exactly where the public beaches are but where you can go and get some privacy, they will tell you which restaurants maybe has great happy hour specials, or how to sit out on the patio on a gorgeous day like today and not have to break the bank.”