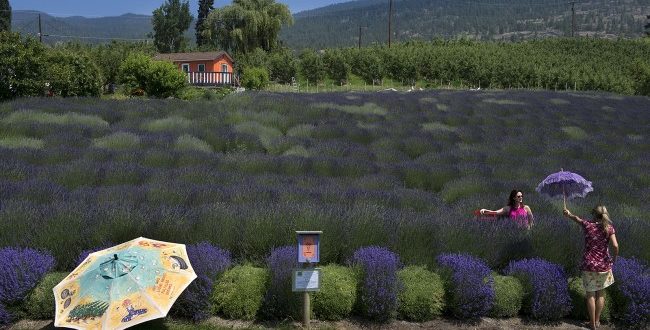 Barrel tasting great wine, hanging out with friends in a lavender field, and picnicking al fresco in a vineyard surrounded by beautiful mountains. What a perfect day in Napa. Except for one thing. I’m not in Napa, California. I’m separated from that hallowed wine region by two states and an international border.

The Okanagan Valley of southern British Columbia, one of the warmest regions in Canada, has a microclimate ideal for grape growing. With 4000 hectares of vineyards, it’s the second largest wine region in the country.

While the first vineyard was planted in the Okanagan at the Oblate Mission in Kelowna in 1859 by French Catholic priest Charles Pandosy for the production of sacramental wine, it would be more than a century until commercial production would begin to seriously take root.

More than 60 grape varieties now grow in the Okanagan ranging from the classic Merlot, Cabernet Sauvignon, Pinot noir and Chardonnay to the way off-the-beaten-path varietals of Bacchus and Kerner.

In addition to year round tastings at a number of vineyards, several wine festivals dot the calendar.

The Kelowna International Airport located in the heart of the Okanagan Valley connects to major North American and Canadian cities.

The old adage applies to the Okanagan, nicknamed the Napa of the North, when it comes to its success in the world of wine. Translated into viniculture speak, it’s the terroir, terroir, terroir.