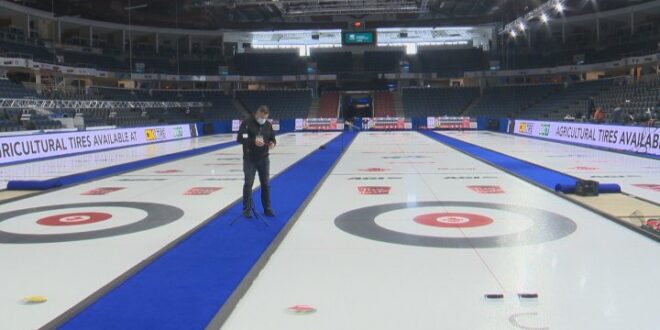 After taking place in a bubble in Calgary in 2021, this year’s Brier in Lethbridge, Alta., welcomes curling fans to attend for the first time in two years.

The Enmax Centre will potentially be seating its capacity of up to 5,900 people after the province lifted most COVID-19 restrictions less than a week ago.

“We were hoping, but we were never confident, and when we heard we were going to get to full capacity, it was an amazing feeling,” said Brier host committee vice-chair Kirk Mearns.

Lethbridge is no stranger to marquee curling events. The city hosted the 2007 Scotties Tournament of Hearts, as well as the 2012 women’s and 2019 men’s world curling championships.

Enmax Centre general manager Kim Gallucci believes the Brier will have fans flocking to the city.

“This is a major curling sport event and it’s the grand champion for the men’s, so this is a real opportunity for people to come out and see some great curling,” Gallucci said.

According to Brier officials, expanding from half capacity to full capacity is creating a rush on tickets, ever since Premier Jason Kenney announced Alberta would be moving to Step 2 of its plan to ease restrictions.

“We probably jumped $300,000 in ticket sales in the first week that they announced the restrictions (were being lifted),” Mearns said. “Especially on some of the really important things (like) finals weekend. Things like that were already sold out at half capacity. Those got to jump to full capacity right away.”

“I think the big thing for fans is knowing they’ll have the full experience,” said Nolan Thiessen, Curling Canada’s executive director of marketing and fan experience.

And with restrictions softening, there’s optimism those Brier spectators will venture away from the ice between draws.

“It really makes for a great event for everyone and will really encourage tourism back into Lethbridge,” Gallucci said.