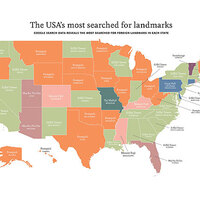 Google data reveals every state’s most searched for landmark

Luxury travel provider Kuoni has revealed that the Eiffel Tower is the landmark Americans want to see most, having topped the wish-lists of an astounding 21 states.

Despite the ongoing COVID-19 pandemic, online searches for the world’s most famous landmarks have risen by 20% over the past month. Curious to discover which landmarks the US wants to visit most, Kuoni analysed search data to find out the most Googled foreign landmarks in America. This was achieved by ranking average monthly search volume for each landmark and excluding any landmarks local to the US.

Paris’ Eiffel Tower, renowned for its association with love and romantic proposals, was the most searched landmark in America. Towering above searches for other famous landmarks, the culturally iconic structure topped landmark searches for 42% of US states, including New York, New Mexico and California.

Landmarks the US Wants to See Most

Pompeii followed as the second most popular landmark to travel to and was favoured by 16 states; with Texas, Montana and Ohio amongst those researching a trip to Italy’s ancient city over any other landmark. The excavated city was covered in volcanic ash due to the eruption of Mount Vesuvius in AD 79, preserving an intimate glimpse into the everyday life of its inhabitants. Named a UNESCO World Heritage Site, it receives 2.5 million annual visitors and is the fifth most searched landmark globally.

Famed Japanese Mount Fuji was front of mind for four states including Colorado, Mississippi, Kentucky and Rhode Island, ranking as the third most searched for overall. One of Japan’s “Three Holy Mountains” and another UNESCO Cultural Site, Mount Fuji is frequently used as a source of inspiration for the arts and attracts sightseers and hikers from all over the world.

Pennsylvania, Maryland, Connecticut and Delaware were most keen to visit The Great Wall of China; the series of defensive walls and fortifications built over 500 years ago make up the largest wall in the world. The wall snakes its way through the Chinese countryside, offering stunning views of surrounding mountains and greenery for an astounding 10 million visitors each year.

Peruvian architectural feat Machu Picchu took the top spot for Florida, Arizona and Utah, making it the fifth most searched for by the states. Constructed mainly of polished dry-stone walls, the 15th century citadel is considered to be one of the New Seven Wonders of the World, as it was only discovered in 1911.

Ivory and marble mausoleum the Taj Mahal ties for sixth place alongside Britain’s prehistoric monument Stonehenge, both favoured by a state each. The Taj Mahal, which translates to ‘Crown of the Palace’, was commissioned in 1632 as a tomb and was Missouri’s most searched for landmark, whilst the British cultural icon and Scheduled Ancient Monument Stonehenge was as the top of Vermont’s travel wish-list.