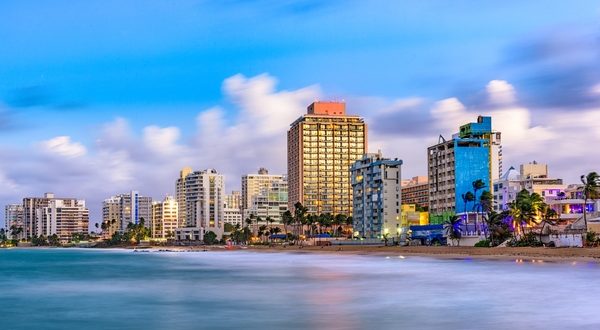 The disastrous impact of last year’s devastating hurricanes is quickly developing into an unprecedented victory for the island’s crucial tourism industry, said top tourism and hospitality officials at a media roundtable discussion in New York this week.

The deadly storms provided Puerto Rico tourism stakeholders with a somewhat ironic “opportunity to revitalize Puerto Rico’s tourism and hospitality product in a way that might not have happened before,” said Brad Dean, CEO of Discover Puerto Rico, the island’s new destination marketing organization.

Puerto Rico has also launched a revamped tourism marketing effort alongside several revitalized hotel properties and new attractions. At the forefront of the rebound is Discover Puerto Rico, whose sole mission is “the branding and promotion of Puerto Rico tourism,” said Dean.

The new agency is among several groups – including everyday Puerto Rico citizens – who have played important roles in the launching “a comeback our industry has never seen before,” said Dean.

In fact, hospitality and tourism officials at this week’s media panel said Puerto Rico tourism activity is fast approaching pre-storm levels. The island’s airports are serving an average of 110 daily flights from 28 different airlines said Clarissa Jimenez, president and CEO of Puerto Rico Hotel & Tourism Association (PRHTA). “Within the next few months we expect flights to return the pre-Maria levels,” she said.

Furthermore, of the 15,000 rooms available at PRHTA-member properties prior to Hurricane Maria, only 3,600 remain unavailable. Jiminez expects “most of the properties will be reopened with a great new product” by December.

With everything going on, it’d be easy to miss the good news coming out of #PuertoRico. #WeAreHilton #CoverTheProgress https://t.co/LW0eP5xqvG

That group includes one of Puerto Rico’s signature properties, the Caribe Hilton, which opened in 1949 as the first Hilton hotel outside of the United States. Located on a peninsula between the Old San Juan UNESCO World Heritage district and the trendy Condado neighborhood, the Caribe Hilton suffered significant damage from Irma and Maria and has remained closed since the storms.

Pablo Torres, the Caribe Hilton’ longtime general manager, said the hotel’s closure following the hurricanes provided operators with an opportunity to undertake complete renovations that might not have occurred otherwise.

Torres said the hotel will re-open by the end of the year with 650 fully new rooms, new dining options, renovated public spaces and 65,000 square feet of new meeting facilities. “This is a golden opportunity,” said Torres. “We are going to be stronger than ever.”

Meanwhile, Dean said resurgence in Puerto Rico’s tourism business is critical to its struggling economy, particularly in the wake of the devastating storms. “Coming back is not just important to hoteliers and tourism officials but the 77,000 people in Puerto Rico who work in and rely on tourism to earn a living and put food on the table,” Dean said.

Discover Puerto Rico and the island’s citizenry have has sought to publicize Puerto Rico’s impressive rebound via #CoverTheProgress, a Twitter campaign designed to document the island’s recovery through before-and-after photos of points across the island.

“We worked with the community on #CoverTheProgress campaign. The goal is to offer updated, accurate images of Puerto Rico so people would know what to expect when they come to visit,” Dean said. “It is also a method to share the stories of ordinary people who have been part of the recovery.”

Puerto Rico entrepreneurs are also creating new attractions in the wake of the storms, highlighted by District San Juan, a five-acre live entertainment complex located adjacent to the Puerto Rico Convention Center near San Juan’s Condado district. The venue is scheduled to open in late 2019; Dean called it a “game changer” and described it as “Times Square with a Latin tinge.”

Discover Puerto Rico might also be called a “game changer,” as the organization not only combines previously separate leisure and group travel marketing functions under one roof but is also a group that will offer “a consistent message and a solid brand that will not change with political cycles,” said Dean.

“We know that has been a problem for marketing Puerto Rico in the past,” continued Dean. He said future messages will focus less on sun-and-fun activities and more on Puerto Rico’s rich cultural, architectural and gastronomic attractions and its diverse regions beyond Old San Juan.

Dean said tourism’s importance to Puerto Rico’s recovery cannot be overstated, adding “There is no better way to help your fellow American citizens in Puerto Rico than to schedule your next vacation, meeting, conference or convention there [to] help accelerate this economic recovery.”