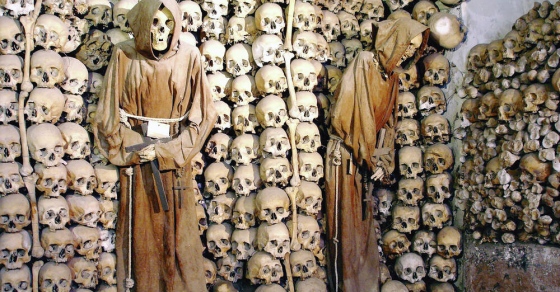 Deep under the streets of Paris, I was all alone…surrounded by literally millions of bones — tibiae, fibulae, pelvises, and skulls, all stacked along miles of tunnels. I was in the Paris Catacombs. I jumped at the opportunity to pick up what, once upon a time, was a human head. As what seemed like two centuries of dust tumbled off the skull, I looked at it…Hamlet-style. Just holding it was a thrill.

I tried to get comfortable with it…to get to know it, in a way. I struggled with the temptation to stick it into my day bag. Imagine taking home a head dating back to Napoleonic times. What an incredible souvenir. But I just couldn’t do it. The next year, I returned to those same catacombs, pumped up and determined this time to steal me a skull. It was a different scene. Skulls within easy reach of visitors were now wired together and signs warned that bags would be checked at the exit.

The Paris Catacombs show off the anonymous bones of six million permanent residents. In 1786, the French government decided to relieve congestion and improve sanitary conditions by emptying the city cemeteries, which had traditionally surrounded churches. They established an official ossuary in an abandoned limestone quarry. With miles of underground tunnels, it was the perfect location. For decades, the priests of Paris led ceremonial processions of black-veiled, bone-laden carts into the quarries, where the bones were stacked into piles five feet high and up to 80 feet deep, behind neat walls of skull-studded tibiae. Each transfer was completed with the placement of a plaque indicating the church and district from which that stack of bones came and the date they arrived.

Today, you can descend a long spiral staircase into this bony underworld (ignoring the sign that announces: “Halt, this is the empire of the dead”) and follow a one-mile subterranean public walk. Along the way, plaques encourage you to reflect upon your destiny: “Happy is he who is forever faced with the hour of his death and prepares himself for the end every day.” Emerging far from where you entered, with white limestone-covered toes, is a dead giveaway you’ve been underground, gawking at bones.

While I eventually outgrew my desire to steal a skull, in later years, as a tour guide, I’ve discovered I’m not the only one intrigued by human bones. If bones are on your bucket list, you’ve got plenty of options. Throughout Europe, Capuchin monks offer different bone-ventures. The Capuchins made a habit of hanging their dead brothers up to dry and then opening their skeleton-filled crypts to the public. Their mission: to remind us that in a relatively short period of time, we’ll be dead, too — so give some thought to mortality and how we might be spending eternity.

In the Capuchin Crypt in Rome, the bones of 4,000 monks who died between 1528 and 1870 are lined up for the delight — or disgust — of always wide-eyed visitors. A plaque shares their monastic message: “We were what you are…you will become what we are now.”

The Capuchins of Palermo, Sicily, offer an experience skull and shoulders above the rest. Their crypt is a subterranean gallery filled with 8,000 “bodies without souls,” howling silently at their mortality. For centuries, people would thoughtfully choose their niche before they died, and even linger there, getting to know their macabre neighbourhood. After death, dressed in their Sunday best, their body (sans soul) would be hung up to dry.

In Kutná Hora, in the Czech Republic, monks took bone decor to an unrivaled extreme. Their ossuary is decorated with the bones of 40,000 people, many of them plague victims. The monks who stacked these bones 400 years ago wanted viewers to remember that the earthly church is a community of both the living and the dead. Later bone-stackers were more into design than theology — creating, for instance, a chandelier made with every bone in the human body.

In Europe, seekers of the macabre can get their fill of human skeletons. And in doing so, they learn that many of these bones — even long after death — still have something to say.

Previous Take in the Fall Colors at Top Destinations Across the Country
Next Saskatoon economy continues to improve post-pandemic, data shows