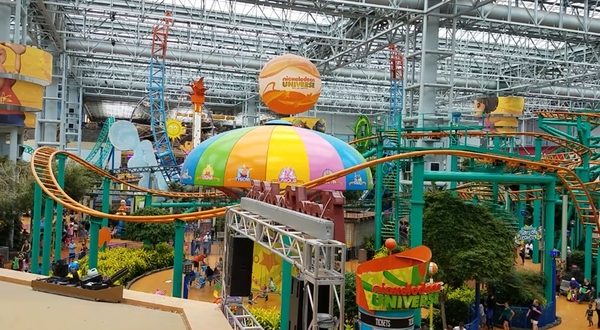 There are malls, and then there’s the Mall of America.

Although easily eclipsed by the shopping meccas of Asia, the MoA remains the biggest shopping mall in the United States, at least by square footage. (King of Prussia Mall in Pennsylvania actually has more retail space, but now we’re just being super pedantic).

And while it may not have the square footage of megamalls like Bangkok’s Centralworld, we can say with confidence that it most likely has the best coasters. It certainly has the best Teenage Mutant Ninja Turtles-related ride, which is a phrase that would have sent the 10-year-old version of this writer into fits of joy.

Located in the heart of Mall of America’s endless corridors of commerce, Nickelodeon Universe took over for the old Camp Snoopy in 2008, giving a fresh look to the park with its many famous licensed characters.

Before you pack up the family and point your GPS to zip code 55425—yes, this mall is so big it has its own zip code—here are a few things you need to know:

Every ride is between 3-6 tickets, and while you can save $5 by ordering them online, you can also get them from a kiosk by the Backyardigans Swing-Along. (As a precaution, the guest services people around this kiosk are there to help you with the machine, but they are also there to get you to buy tickets. Take their advice with a grain of salt).

You can get an all-day wristband for $35.99 or a two-day wristband for $49.99. If you’re there all day, it’s a pretty obvious choice, but it’s worth weighing all of your options. Especially if you’re bringing multiple kids, each of whom would need their own wristband, and you’re only there for a few hours (which is enough time to tackle most of the rides).

Of the 25 ticketed rides, 12 take three tickets and 13 require six tickets. So your average ride takes 4.56 tickets. The lines seemed about average when we were there, with 15 minutes being the typical wait time. So figure you’re going to go through 18 tickets per kid per hour. This matches our average while we there: I purchased the 84-point pass for three kids, and after two hours we still had points left over.

Hindsight being 20/20, I could have opted for the 48-point pass and it would have run out right around the time my patience did.

As a native of the great state of Ohio, I’ve always considered myself a little bit of a coaster snob. As far as indoor amusement parks go, there are a few pretty thrilling rides inside Nickelodeon Universe.

The Pepsi Orange Streak is one of the few rides that has never changed, keeping the same name through the Camp Snoopy years, the forgettable “Park at MoA” era and now as part of Nickelodeon Universe. It’s also one of the most uniquely thrilling coasters owing in large part to the way it weaves in and around the park.

If you put this thing in the middle of Cedar Point, you’d barely move the needle, but whizzing over a toy store and above the bumper cars, seemingly inches away from shoppers’ heads, adds a thrilling wrinkle to this coaster.

Way more thrilling than it has any right to be is the Spongebob Squarepants Rock Bottom Plunge. For a show geared at the pre-K set—and, let’s be honest, buzzed college students—its namesake ride starts out with a nice face-down drop before pushing through some pretty harrowing curves. 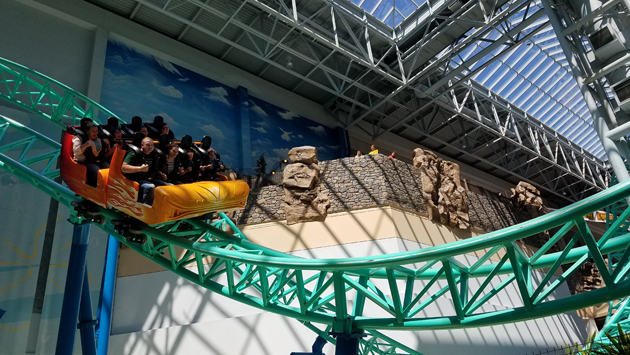 Another great ride is the Avatar Airbender, but it is clearly modeled after a skateboard and a halfpipe. I don’t want to tell you your job, Nickelodeon, but the Avatar ride clearly should have been a Ninja Turtle ride.

It’s such a lay-up, made all the more baffling by the fact that one of the Ninja Turtles rides, Shell Shock, has you flying around as if you were in some kind of airbending tornado. (Note: I have never seen Avatar: The Last Airbender before, but it is my assumption that it features considerably more airbending than it does skateboarding).

This one is probably the most valuable advice you can receive. The west parking garage at Mall of America has a ridiculously low maximum height of 7’. So if you’re rolling to the mall in your Town and Country with a cargo topper on, you might want to find alternative parking.

(NOTE: they were nice enough to reserve a few high-ceiling spots out front for idiots like myself who decided to just go for it. Enjoy this footage of me scraping up my cargo topper on the way out of the parking garage).

Previous Icelandair to launch Tampa flights in September
Next Hints of grandeur: Buenos Aires architecture a reminder of former wealth