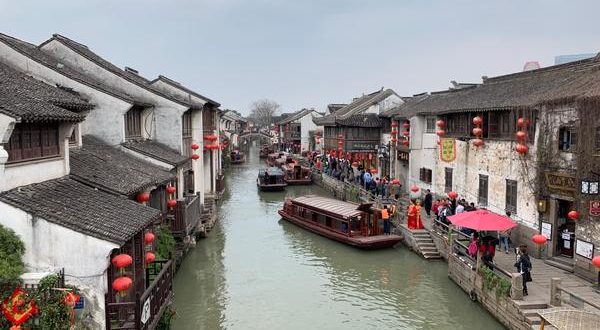 Suzhou is an ancient city whose profound history plays a large part in its culture and way of life, even today. Located in the Jiangsu Province, around 60 miles west of Shanghai, it’s easy for travelers to get to via train or car, making it a worthwhile and convenient day trip. Though one day isn’t enough to fully experience the Venice of China.

Suzhou is a special place, one defined by canals, classical gardens, silk industry, “su bang cai” or Suzhou cuisine and more. It’s a city that still retains sections of old world charm, giving travelers the opportunity to take a step back in time and appreciate one of the most beautiful cities in China.

42 percent of this unique city is covered by water. That means you really can’t explore Suzhou without crossing numerous stone bridges over lakes, canals and rivers. One of the coolest ways to tour the city is by boat. Boat trips give you a whole different look at life in Suzhou, as they float through the backs of homes and businesses.

Head over to Downtown Suzhou to experience a Suzhou-style gondola tour on the Weichang River, which showcases sites including Panmen Gate and the Couple’s Retreat Garden. This area is home to nine east-west canals and 12 north-south canals.

Alternatively, explore the charming area of Pingjiang Street by foot, where you can watch these traditional Chinese boats pass on the Pingjiang River while sipping tea in one of the quaint teahouses or popping in and out of the street’s many boutique shops.

Shantang Street is another popular area, as it’s home to historic temples, ancestral halls and memorial arches that include Tonggui Bridge and Yuhan Hall, the most preserved residence of Ming dynasty.

Be sure to stroll through Old Shantang Street, a 395-yard slice along the Shantang River often referred to as “old Suzhou’s miniature,” which offers Suzhou snacks, tea houses, shops selling local crafts and a look into the past—it’s over 1200 years old! Take a cruise at night once the red lantern lights turn on. The old architecture and historic buildings take on a new feel come nightfall.

Tongli Water Town is one of six famous water towns in the Suzhou area. Tongli Water Town on Lake Tai is home to fifteen brooks and a staggering forty-seven bridges. The most famous bridges being Taiping (peace), Jili (luck), and Changing (celebration).

This ancient town is over 1000 years old and boasts an eclectic mix of aquatic channels and river systems. For a real local experience, visitors can take a stroll along a tree-shaded path or walk single file through tiny lanes that wind through the town. The stone paves streets have preserved their original style from the Ming and the Qing dynasties.

Another must-do? Take a boat ride through the waterways. From waterside teahouses and restaurants to gardens, pavilions and temples, Tongli is a prime example of an ancient Chinese town.

Suzhou is most known for its ornate classical gardens. The gardens are miniature replicas of natural landscapes complete with pavilions, ponds, bridges, rockeries, flowers, streams and more. Known for their timelessness and tranquility, Suzhou’s gardens are impeccably landscaped spaces that were built by aristocrats and the wealthy.

There are over 60 preserved gardens to explore, nine of which have been collectively designated as a UNESCO World Heritage Site. They include The Humble Administrator’s Garden, The Lingering Garden, The Master of Nets Garden, The Mountain Villa with Embracing Beauty, The Canglang Pavilion, The Lion Forest Garden, The Garden of Cultivation, The Couple’s Retreat and The Retreat & Reflection Garden.

These gardens exhibit the key characteristics of classical gardens. Separating them from others around the world is the fact that each Suzhou garden must contain four main characteristics: water, buildings, flowers and trees and rocks. These gardens are full of Chinese history and culture, in addition to beauty.

Though commonly referred to as Shanghai cuisine, the flavors of “su bang cai” are much more delicate and mild than that of Shanghai’s. Thanks to its close proximity to water, Suzhou is known for its vegetable and fish dishes—particularly dishes with freshwater fish, especially eel and carp.

Suzhou is one of the oldest cities in the Yangtze Basin dating back more than 2,500 years. Popular sites include Hanshan Temple, which was made famous by Buddhism culture and the bell ringing festival which takes place on December 31 each year.

Another is Tiger Hill, the final resting place of Hu Lu, the founding father of Suzhou. This is also home to the leaning Cloud Rock Pagoda. An innovation in Chinese architecture, this 7 story, 10th-century octagonal pagoda is built entirely of brick.

Suzhou is known for its high-quality silk production and served as the center of the silk industry during the Tang (618 – 907) and Song Dynasties (960 – 1279). Today, visitors can check out the Suzhou Silk Museum, which shows the path of silk from its discovery to present day, or the No.1 Silk Factory, where visitors learn about how established practices of harvesting silk have combined with modern methods.

Workers still unravel the cocoons by hand as delicately as they did 1,000 years ago. Another cool fact? Nearly 80 percent of the world’s wedding dresses are produced in the city. So if you’re interested in weddings, then you can’t miss out on Suzhou’s 1000+ wedding dress stores.