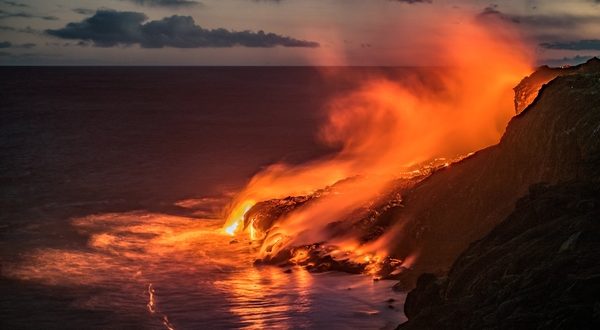 Soldier Falls Into Hawaii Volcano Trying to Get a Closer Look

A 32-year-old soldier was visiting the Hawai’i Volcanoes National Park when he fell into the Kilauea volcano after climbing over a railing to get a closer look.

The man was a Schofield Barracks soldier on the Big Island for a training mission at Pohakuloa. He fell 70 feet into the volcano and amazingly survived.

Witnesses say he ignored the metal railing placed there for visitors’ safety and climbed over it at the Steaming Bluff overlook, lost his footing, and fell off the 300-foot cliff.

He was found 70 feet below on a narrow ledge, seriously injured.

The Department of Defense pulled him to safety with ropes and a helicopter and he was airlifted to Hilo Medical Center.

“He obviously is doing remarkably well for his fall; only time will tell what injuries he has,” battalion chief of the Hawaii County Fire Department Mattias Kusch told Hawaii News Now.

Kilauea is the most active volcano on the island and it just reopened after it had erupted in May last year.