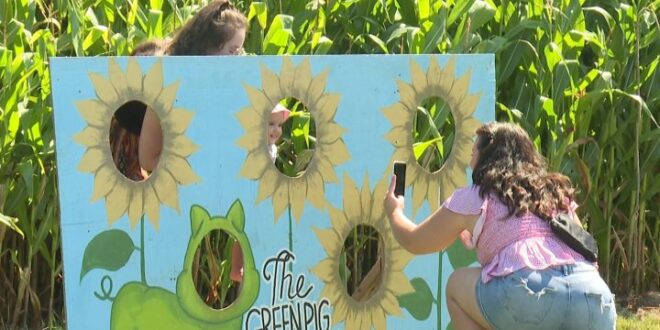 Sunflower fans and selfie enthusiasts came out in large numbers on Sunday to enjoy the over 250,000 blooms at the Sunflower Festival in Salisbury, N.B.

She said that planting the flowers in preparation for the festival, which includes 30 varieties of sunflowers on 6.5 acres of land is a large undertaking.

“It started, probably, May. It takes about two months to stagger them all so they’re ready for the 10 days that we’re here. It’s definitely been a long process,” she said.

She said events like these are key to attracting people from nearby Moncton, who make up most of her customer base.

Moncton’s Kimberly Snider decided to come up because she had seen all the pictures people posted on social media with the sunflowers.

“We’ve been seeing it and hearing about it for years, and I’ve never had an opportunity to check it out. I just think sunflowers are pretty and all the pictures people take are really pretty,” she said.

“It’s very good,” he said, adding he and his sister had a chance to use a large swing in the sunflower fields and enjoy other attractions.

“We’ve just ran around, had some fun, beautiful day overall.”

Michelle Stoddart drove up from Rothesay, roughly an hour and a half away from Moncton on her way to Shediac.

“This was our first stop on the first day of our vacation,” she said.

The festival continues until Aug. 28.