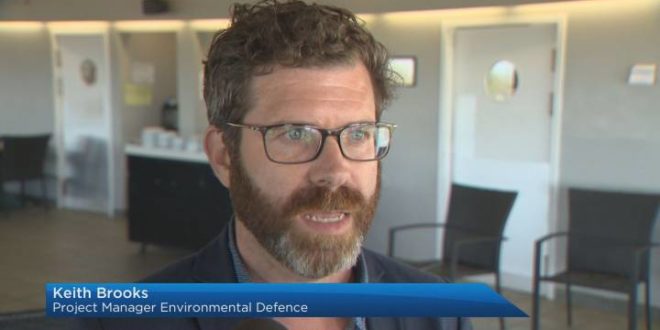 ‘They test the water quality every day:’ Parlee Beach flies Blue Flag for the first time

The designation, which is awarded to beaches that meet over 30 different criteria, was given to the beach in May, but on Saturday the flag was raised for the first time.

“The Blue Flag is one more step in the right direction for Parlee Beach, it’s a very important distinction. You need to meet 33 criteria to get that flag so it means that they are very rigorous in their testing,” said Robert Gauvin, New Brunswick’s minister of tourism.

This is a big deal for the beach that has experienced water quality issues over the last several years. The designation is only awarded to beaches that have acceptable water standards at least 80 per cent of the time. Parlee Beach has been awarded after posting a rate of 88 per cent.

It’s a particularly welcome sight to the business community that has expressed concern in the past over a declining number of tourists at the beach.

“This is an area where we [serve] a lot of the local tourists of the south eastern part of the province, the greater Moncton area to be more specific, the people from Quebec, from Ontario, from Nova Scotia, to come to Parlee beach,” said Jacques LeBlanc, who serves as MLA for the area.

LeBlanc added that he’s very happy for local businesses “because they’ve been impacted in the last couple years.”

The designation is given out by the organization Environmental Defence.

Projects Manager Keith Brooks says the designation ultimately shows that a given beach is following rigorous testing standards, especially on days deemed not safe to swim.

“The good thing about having a blue flag is that means you are testing so any day when a red flag is flying you know those are days that we are not swimming and we’re actually testing the water quality so we know if it’s good or not good,” he said.

Brooks added that Parlee Beach is tested every day, which is much more often than the organization requires.

So far this year Parlee has only been closed once for water quality issues.