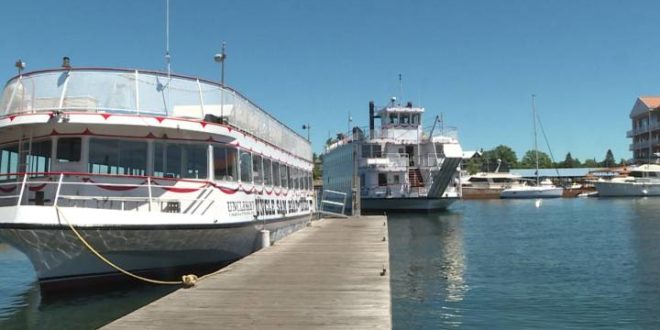 Border town Alexandria Bay in northern New York State relies on tourism, like many of the communities lining both sides of the Thousand Islands.

With imposed by President and reciprocal ones promised by Prime Minister Justin Trudeau, these small tourist industries may be in for a hit.

Ron Thomson runs and says about 10 per cent of his business comes from Canada.

“Politicians are politicians and living along the river we have a whole different set of values,” said Thomson. “We love our Canadian neighbours and we hope they feel the same way about us.”

Thomson, also a board member of the town council, says local businesses in Alexandria Bay have stepped up to keep Canadian and American relations positive.

“All the businesses in the village on Victoria Day weekend took the Canadian dollar at a loss actually, which represents a discount.”

On the Canadian side of the border, Kingston Mayor Brian Paterson says that there has been an effort to keep up cooperation at the lower levels of government, despite tensions at the national level.

“We’ve been able to sit down with different officials from Syracuse and Watertown and we’re talking about how we can work together and how we can do more business together,” said Paterson.

Although there is a potential for a dip in tourism in border towns on both sides, people canvases on the Alexandria Bay streets on Tuesday responded positively to their opposing neighbours.

Ken Smith is from Perth and was visiting Alexandria Bay for the day. He says his decision to visit the American town wasn’t affected by tariffs or NAFTA negotiations.

“I think over time these things will play out in a positive way and hopefully, as you say, cooler heads will prevail.”

That opinion seems to be holding true for Americans as well considering visits to Canada as well.

Richard Stocking is from Pittsburgh, N.Y. He said he wouldn’t be put off travelling to Canada because of the trade war.

“We go to Canada quite often and love it up there, around Niagara Falls usually.”

Michael Scriminger from Canton, N.Y. says that he often makes the trip across the border to Kingston, and that he won’t stop because of Trump or Trudeau.

“Just last weekend I was in Kingston and spent the weekend, while I spent the day and dropped my son off for an event he had to go to.”

The on-going good will between border towns may be tested further as Canadian tariffs on American products come into effect this July.