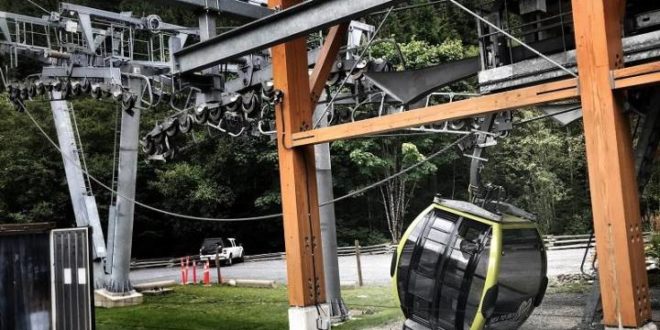 The collapse of the popular Sea to Sky Gondola in Squamish on Saturday has dashed dozens of wedding plans for the rest of the season.

The Squamish RCMP is treating the collapse as a criminal investigation and said Saturday that the gondola’s cable appears to have been cut.

No timeline has been given for when the gondola may be repaired and reopened, which has planners scrambling to find alternative venues.

Caroline Hyatt, owner of Love & Confetti Wedding and Event Planning in Squamish, said she has up to five weddings she’s now trying to find new venues for.

Many of those couples have guests flying in from out of town, however, meaning the dates can’t change.

“At first, when I heard what happened Saturday morning, I didn’t think it would affect all my weddings,” she wrote in an email. “But because this is now a criminal investigation and there was more damage than I first thought, it looks like this will take a lot longer to fix.”

Hyatt said staff at the gondola have been helping her find new venues in the Squamish area, and have offered refunds for booking fees for all the weddings she’s working on.

The challenge, Hyatt said, is finding venues that can equal the gondola’s main selling point as a wedding venue: the spectacular views of Howe Sound. That’s forced her to think outside the box.

“Lots of people from the community have contacted me,” she said, pointing her towards private properties in Brittannia Beach and Furry Creek.

In a statement to Global News, Rachael Lythe with Sea to Sky Celebrations said they are also working with their clients to rebook “several” weddings that were scheduled at the attraction.

“While heartbroken over no longer being able to have their dream weddings at their desired location, our clients are understanding and horrified, like us, over what has taken place and we are working with them to find alternative options,” Lythe said.

The company also expressed its condolences to the gondola staff and the Squamish community.

Other wedding planners contacted by Global News did not return requests for comment Sunday.

No one was injured in the collapse, which was reported around 4:30 a.m. Saturday.

The company that operates the attraction says a haul rope (five-centimetre cable) snapped, and most of the gondola’s 30 cabins fell to the ground.

Six cabins were in the gondola’s upper and lower stations and were unaffected.

The lift manufacturer, Dopplemayr, has sent a team to the site to inspect the gondola along with an international rope maintenance company.

‘We imagine there will be some impact’

Squamish Mayor Karen Elliott said losing the gondola will likely be a major blow for tourism, which has increasingly become a key player in the district’s economy.

“Many people use [the gondola] as a day trip from the metropolitan area, and it encourages people to stay overnight,” she said.

“We imagine there will be some impact to our restaurants and accommodations, but it’s a bit too early to tell” how much of an impact the incident will have economically, she added.

The mayor was quick to point out Squamish itself is still open for business, and will likely continue to see high tourism levels for the rest of the summer despite the gondola’s collapse.

Elliott said she’s been in touch with gondola staff, who have told her they could have a better idea later this week of when the attraction might be reopened.

“They could be up and running in a short period of time, or it could be longer,” she said. “We just don’t know yet.”

RCMP Insp. Kara Triance said investigators are still collecting evidence from the scene, and the charges would include mischief resulting in damages over a million dollars.

“We’re taking this very seriously, due to the large scope of impact this is having on the community as well as the nature of the offence,” she said. “It was severe just in that it is such a large-scale vandalism.”

Triance said police are not aware of any threats made towards the gondola operators or staff.

RCMP has reached out to other tourist attractions in the area, including Whistler Blackcomb and other ski resorts, to alert them to the incident.

“We wanted to ensure they were able to conduct whatever safety precautions they needed to conduct and answer safety concerns in those communities,” Triance said.

Investigators are canvassing security footage from the area, and are calling for more to be released.

—With files from Grace Ke and Simon Little