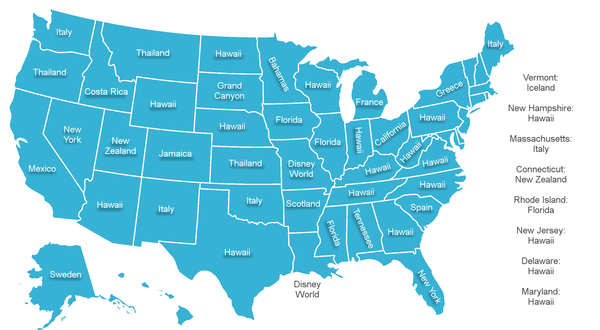 Where Your State Wants to Travel the Most

It’s no secret that Americans want to travel the world in 2019. But where does your state want to go in the New Year?

The folks over at DaringPlanet.com recently analyzed geotagged tweets including hashtag #vacation, #travel and similar terms (more than 200,000 tweets) over the last month to determine each state’s most mentioned travel destination. Keep in mind that any place from within its own state was omitted to avoid false positives such as people visiting New York City tweeting about being there.

The results suggest that Americans’ most preferred vacation destination is actually located within the U.S. as Hawaii was the top destination for more than one-third of the 49 eligible states.

Meanwhile, 10 percent of the country wants to vacation in Italy, with Maine, Massachusetts, New Mexico, Oklahoma and Washington dreaming of the European hotspot more than any other place. Florida wasn’t far behind Italy, conquering the hearts and minds of four states across the country, including Illinois, Iowa, Mississippi and Rhode Island.

In addition to Hawaii and Florida, California (Ohio), New York (Florida and Nevada) and Tennessee (Alabama) have captured Americans imaginations this year. The latter is arguably the most head-scratching as Tennessee and Alabama literally share a border.

At least three states—Kansas, Montana and Oregon—mentioned Thailand more than any other place when referring to vacation travel.

It should come as no surprise though that residents of frigid Minnesota are eyeing the Bahamas this year while it’s only fitting (and funny) that the cannabis-friendly state of Colorado is drawn to the birthplace of Rastafarianism, Jamaica. Nonetheless, the Caribbean destination has a ton to offer American visitors looking to escape the cold, including amazing beaches and natural attractions, phenomenal cuisine and a whole lot more.

While 18 states have Hawaii on the brain in 2019, the Aloha State is most interested in something much more specific in Yellowstone National Park, which is the nation’s first national park and one that should be on every travelers’ radar this year.

South Dakota has its sights set on the Grand Canyon in the New Year while Louisiana and Missouri covet Walt Disney World more than any other travel destination.