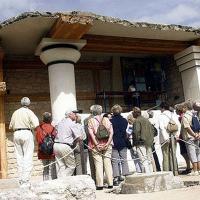 It’s no longer ‘over the hill’ but more ‘young at heart’ as the majority of retirees in Britain now claim to feel younger than their age.

The research, conducted by tour operator Jules Verne, found that 67% of over 50s feel younger than their actual age. Women tend to feel younger than men with only 19% of women admitting to feeling their age, compared with almost 30% of men.

It seems life in Cardiff can take its toll on its residents harder than anywhere else in the UK, with 41% of retirees there saying they feel their age. In contrast, 80% of those in Belfast feel younger than they are, while nearly one in ten from Liverpool feel older.

When it comes to enjoying retirement, travel is the most important aspect for more than half (55%).

For those who travel during or would like to travel more during their retirement, the most popular countries are:

The survey also looked into how people, if given the chance, would have planned for their retirement differently. An increased retirement income seems to be the driving factor, with one in four wishing they had started saving earlier in life, one in ten regretting not opening a private pension during their working life and one in six annoyed they did not work for longer.

Unsurprisingly, health is also a big factor for those when planning for retirement with one in five wishing they had paid more attention to it when they were younger.

Other enjoyable aspects of being free from working responsibilities include: earning money online, decluttering the house, not having the pressure of trying to please everyone at work, seeing grandchildren and great grandchildren.

Prini Patel, Head of Marketing at Jules Verne, said: “Retirement is the perfect time to enjoy travel, with the constraints of busy working lives a thing of the past. Key planning earlier in life – including around health, money and pensions – are top of the list of things people who are already retired wish they had done differently. For those thinking about retirement, regardless of age, careful consideration of these will ensure you are in a good place and able to fulfil your wishes, whether it to be through travel, new hobbies or volunteer work.”

Previous An unpleasant-smelling summer for an iconic N.S. tourist town
Next Five Reasons to Visit Uganda’s Land of Warrior Nomads