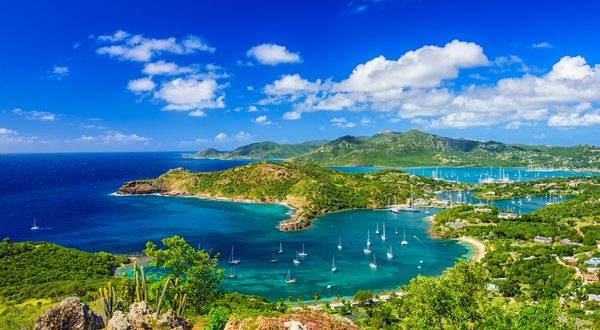 Dual-island Caribbean nation Antigua and Barbuda is continuing a two-year trend of sharply higher land and cruise-ship visitor arrivals, reporting significant increases in both categories in the first half of 2018.

Antigua and Barbuda Tourism Authority (ABTA) officials in late July reported the territory hosted 148,139 overnight, land-based visitors between January and June of this year, a seven percent increase over the same period in 2017.

The territory also recorded 502,527 cruise ship visitors between January and May, an 11.57 percent increase over 2017. Antigua and Barbuda’s combined, first-half 2018 arrivals represent the destination’s highest total since 2008, said ABTA officials.

Additionally, Antigua and Barbuda’s primary source markets – Canada, the U.S. and the U.K. – all posted significant year-over-year increases in land-based visitor arrivals in June. Canadian arrivals climbed 170 percent, followed by the U.S. (14.35 percent), the Caribbean (8.69 percent) and the U.K. (8.27 percent).

ABTA representatives say the destination’s combined tourist arrivals growth will continue this fall with the debut of “significant increased airlift” from North America, the opening of the Hodges Bay resort in October 2018, and a “full” cruise ship schedule.

“We are doubling our airlift out of Miami, introducing new direct service out of New York and Canada, and welcoming new cruise ships to an already busy schedule,” said Colin C. James, ABTA’s CEO. “Combined with our aggressive marketing strategies, we are confident that we will continue to see remarkable growth for the second half of the year.”

While the larger island of Antigua – and most of the territory’s tourism infrastructure – was spared the devastating impact of Hurricanes Irma and Maria, smaller Barbuda was leveled and evacuated for a period following the September storms.

“Antigua did not really suffer from the hurricane but Barbuda was devastated,” said Charles ‘Max’ Fernandez, minister of tourism and investment. “There were more than 400 homes damaged. We worked as quickly as possible to rebuild and restore homes and services.

The higher combined numbers somewhat overshadowed a decline in land-based visitors for Antigua and Barbuda in 2017. The 247,300 overnight travelers the nation reported in 2017 represent a 6.7 percent decline versus 2016.

The territory’s overall numbers grew in 2017 mainly due to a 30.3 percent year-over-year increase in cruise ship arrivals. Fernandez said the country is in the process of building a fifth cruise ship pier to accommodate Royal Caribbean Cruises Ltd.’s Oasis-class ships, the cruise industry’s largest.

“We will continue to invest in infrastructure and service and raise awareness of Antigua and Barbuda, to ensure we see consistent growth in arrivals,” said Fernandez.