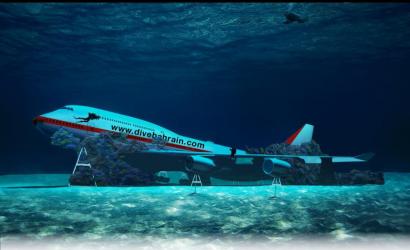 The Bahrain Tourism & Exhibitions Authority has announced the launch of the world’s largest underwater theme park, covering an area of over 100,000 square metres.

Featuring a 70-metre long decommissioned Boeing 747 as its centrepiece, the largest aircraft ever to be submerged, the island is thrilled to play host to an exceptional new diving experience and international attraction.

Set to be delivered before the summer of 2019, work will continue later into the year as more items are set to be fabricated and submerged alongside the plane.

Located off the north coast of mainland Bahrain, 30 kilometres from the Amwaj islands, the underwater spectacle will sit approximately 20 metres deep.

Featuring several sunken structures in addition to the aircraft, the dive site will also include a replica of a traditional Bahraini pearl merchant’s house, artificial coral reefs and other sculptures fabricated from eco-friendly material.

Fully decontaminated from toxic substances, every effort has been taken to limit the project’s environmental footprint and to ensure delivery in the most environmentally sound manner.

Famed as the only island nation in the Middle East, Bahrain’s unique geographical location has always served as a key diving hub for enthusiasts all over the world.

With its rich pearl diving history and abundance of fascinating marine life,  the underwater theme park will further the Island Kingdom’s reputation as a distinct tourist destination, enhancing its presence on the global tourism stage and international diving scene.