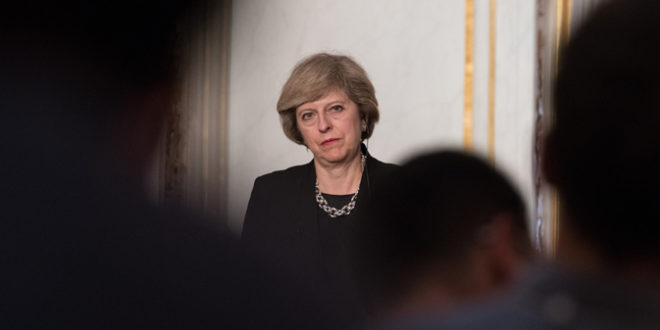 LONDON — The United Kingdom filed for divorce from the European Union on Wednesday, overturning four decades of integration with its neighbours. The move demolishes the notion that EU expansion is inevitable and shakes the foundations of a bloc that is facing challenges to its identity and its place in the world.

“Today the government acts on the democratic will of the British people,” Prime Minister Theresa May told lawmakers in the House of Commons. “This is an historic moment from which there can be no turning back.”

Tusk tweeted that “after nine months the U.K. has delivered,” followed by a photo of Barrow handing him the letter in front of British and EU flags in Brussels.

There is “no reason to pretend this is a happy day,” Tusk told reporters later, emphasizing that the priority now is to minimize costs for EU citizens and member states.

To Britain, he said: “We already miss you.”

May’s six-page letter to Tusk was polite and conciliatory, stressing that Britons want to remain “committed partners and allies to our friends across the continent.” She said the two sides should “engage with one another constructively and respectfully, in a spirit of sincere co-operation.”

The two sides now have until March 2019 to agree on a divorce settlement and – if possible – establish a new relationship between Britain, the world’s fifth-largest economy, and the EU, a vast single market stretching over 27 countries and half a billion people.

As in many divorces, the first area of conflict is likely to be money. The EU wants Britain to pay a hefty bill – Jean-Claude Juncker, president of the EU’s executive Commission, put it at around 50 billion euros ($63 billion) – to cover pension liabilities for EU staff and other commitments the U.K. has agreed to.

Will France and the U.K. remain strong partners?

Just one day before the U.K. government filed for divorce from the EU, the mayors of London and Paris announced new business and tourism collaborations to attract more international visitors.

Mayor Sadiq Khan of London and Mayor Anne Hidalgo of Paris signed off on a new agreement that will showcase both destinations to overseas visitors. Plus, a new initiative called the Paris-London Business Welcome Programme will encourage the flow of trade and investment between the two cities.

Launching in 2018, the tourism agreement will focus on key drivers such as culture and heritage, and combine the resources of VisitLondon.com and Parisinfo.com. The Paris-London Business Welcome programme will include assistance with company set-up, access to co-working space, introduction to the local tech ecosystem and networking, and discounted accommodation. Eurostar will also provide entrepreneurs with preferential rates on their services.

Visitors to London and Paris spend in excess of £30bn (34 billion Euros) per year and the tourism economy in both cities supports 1.2million jobs.

“London and Paris are two of the greatest cities in the world and we have so much to gain from joining forces. Never underestimate the incredible benefits to be found when major cities do business together. Our great friends in Paris and across the continent are well aware that working closely together remains to our mutual benefit,” said Khan.

With file from The Associated Press

Home-based agents are in high demand and competing host agencies are upping the ante as they woo new members, and that has more than a few agents asking themselves, should I make a switch?

Previous These are the two best times to go to the bathroom while on a plane
Next April Fool’s, the sequel: Travel that comes to you, complete with souvenirs and ‘Eau de Souq’