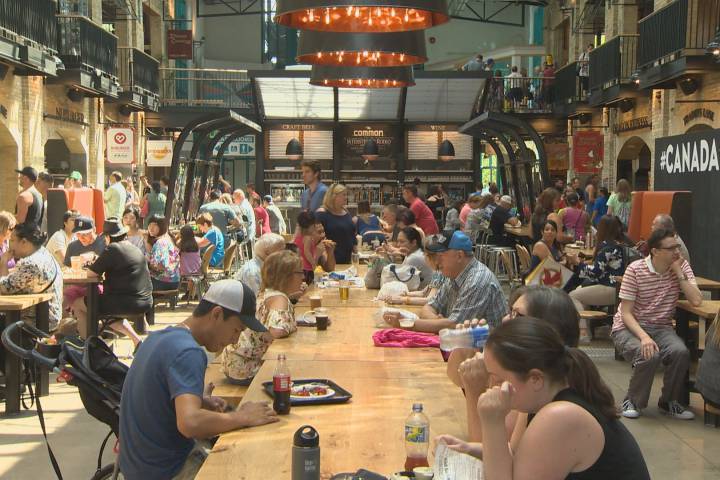 Vendors inside The Forks Market said thanks to the influx of foot traffic during the Canada Summer Games, the impact on the Winnipeg community and the economy won’t soon be forgotten.

“I would say at least 30-40% [more people] right now. It’s increased a lot,” said William Kim, the General Manager at Nu Burger at The Forks.

At the beginning of the games, organizers said the city could expect to see roughly 4,000 athletes and 20,000 visitors flocking in for the two weeks.

While time has been spread between the different sporting venues and exploring the city as a whole, it seems to be The Forks that keeps on pulling in thousands of people almost every night.

Free concerts and late hours inside the market have made it possible for tourists to check out what the local scene is all about.

Staff at the Forks said there’s been a 10% increase in foot traffic just inside the market and not including the Festival Field free concert location. This increase means roughly 11,000 – 20,000 people coming inside the market everyday.

“I don’t know if we were fully expecting it to be as awesome and busy as it has been,” said Riley Chevrinksi with The Common.

Nu Burger staff said they had unexpected line ups throughout the day and night to try their Winnipeg only burgers and The Common staff said curiosity about Winnipeg’s local craft beer scene attracted many tourists their way.

Organizers of the games told Global News before the event kicked off that the projected economic impact from the event would be roughly $153 million.

With the influx in foot traffic at The Forks Market, vendors inside say it’s safe to say the tourist activity from the games definitely gave them an unexpected boost.