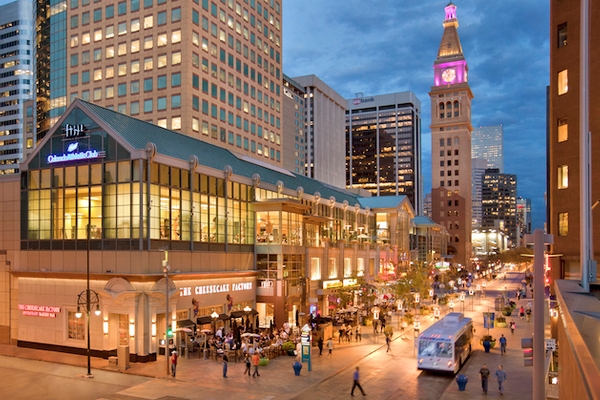 Walking, Eating and Drinking in Denver

Downtown Denver is a walker’s city that’s affordable for long-weekend-warriors with room to be and space to people watch.

The outdoorsy thing here doesn’t just mean weaving your way toward the always in-view Rocky Mountains that beckon all who land here. There’s lots to do in this city which is pretty much 600 miles away, in all directions, from any another metropolis.

The Mile High City has everything from big-league sports teams to farm-to-table cuisine and everything in between, including enough live music to keep anyone dazzled.

Best Bang for Your Buck Food and Drink Spots in Charleston

International Travel to US Declined in 2016

Segways Banned in Some Parts of Barcelona

An added result of Denver’s isolation is that most everyone within its 600-mile ring visits here to satisfy their metropolitan musings. There’s a lot of pleasing-to-be-among red brick and stone building’s here—both historic Victorian and ballsy industrial—that add to the laid-back vibe. Wave buh-bye to that $500/week rental car and move that into your now smiling budget. (Also, a big sayonara to humidity in this high desert.)

Further testimony to its coolness is being featured prominently in books by Jack Kerouac, William S. Burroughs and Neal Cassady—literary legends who used to run around together here.

A key factor in how Denver maintained its legendary status is it not being able to afford the urban renewal that destroyed the charm of so many other American cities in the midst of the last century. Unlike most American states where the capital city is usually one of its duller locales, Denver also houses Colorado’s state capitol.

Several 40-foot totem poles made in the 1870s out of old growth cedars by native artists of the Northwest Coast told their own stories, as totem poles do, at the Denver Art Museum. The late 1800s tipis also amazed, as they too looked like they were made last year.

Then the bandolier bags (from the Great Lakes) stole the show. After beholding the European soldiers’ rifle-cartridge-holding bandoliers, some tribes adopted the design and ran with it to create status symbol bandoliers replete with beads, moose hair, quills and other fancy doodads of the day.

Nearby, the History Colorado Center’s hands-on and high-tech exhibits take you back in time, connecting what was to what’s next. It also has a compelling Native American exhibit, but don’t miss out on their mining exhibit that includes old-time miner’s tools and the miner’s candlestick felt hat (yes, a candle protruding from a hat—and we think life is tough now?).

Only a year old, the 30-minute train link from Denver Airport to the center of downtown’s Neoclassical Denver Union Station is the best nine travel dollars I’ve spent this year: It’s an ultra-simple and comfortable ride, even better if you linger in Union Station and stay at its Crawford Hotel, both of which are simply wonderful. The 100-foot-ceiling station is referred to as Denver’s living room for good reason: It’s also a living museum.

People from every walk of life sit back and enjoy the atmosphere, the station’s bars, restaurants, coffee and ice cream shops.

This space is a feel-good emporium fueled by its Terminal Bar, a charming place that still has its feet on the ground as you order drinks via the former ticket window. Here, you can swing between smoky cocktails and craft brews, sitting wherever you like upon this indoor acre.

Located on the station’s second-floor mezzanine, The Cooper Lounge, a casually elegant high-end cocktail lounge that’s enhanced by the fact some patrons don’t have to drive anywhere later—add stunning views of downtown Denver and Union Station’s Great Hall. By far, this is the coolest train station on earth that serves crisp IPA’s. (Add Snooze, a classic breakfast joint to this mix and you’ve come full cycle.)

Union Station is also where you catch the “Ski Train” to the Winter Park ski resort for a day trip or longer. It takes under two hours and very much reminded me of the many classic ski resorts throughout Europe that are accessible from city centers via train. And like Europe, Winter Park’s ski lifts are right next to its train station when you arrive.

Mountain activities aside, just dining and drinking in Denver could define a great holiday.

The Great Divide Barrel Room, a meeting place as proud as its Hercules Double IPA, is a fine introduction to RiNo (as in: north of the river), an emerging artsy neighborhood where the art scene is not just folks wearing black outfits. Industrial and culinary art is actually made here.

They could also call this place Renovating North, as this is where you can really feel the boomtown Denver is, once again.

But you won’t truly feel RiNo until you hit side-by-side establishments starting with the new Denver Central Market, a gorgeous old-styling marketplace featuring local purveyors peddling everything you’d find in an old country store (but fancied up): artisan bread, chocolate, ice cream, coffee, meat, cheese, and produce. Of course, you can skip the shopping bit and sit down for a drink in the bar that should win an award for people-watching.

Right next to this market sits The Matchbox, a classic dog-friendly dive that cranks guitar-driven favorites and has options to feel the breeze on its front and back patios. This is also a place where you can feel the affable circus of new arrivals melding. By now you’ve noticed the abundance of outdoor graffiti art in this neighborhood, much of it (re)created during the annual Colorado Crush festival.

Also in RiNo, I took it up two notches for dinner at Acorn to sample some of Denver’s nectar. Acorn is set within the Source, a reclaimed 1880’s foundry turned new epicurean marketplace that nudges aside (i.e. kicks to the curb) the pre-fab malls that have bulldozed away much of America’s charm.

The stubbornly independent Tattered Cover Bookstore exemplifies Denver’s time-honored architecture with original wood floors and exposed brick walls as well as exposed ceilings. Speaking of books, Grant’s book 100 Things To Do In Denver Before You Die is the definitive hit list for exploring the wilds and wonders of this town.

Most locals I met approve of the legalized weed boom, although the 1,000 new arrivals a week are creating more traffic than they’re accustomed to. But local and newbies alike enjoy the free shuttle buses that run along the main-vain 16th Street Mall.

Most locals also approve of ChoLon, a Vietnamese fusion restaurant inspired by a Saigon marketplace using French cooking techniques. The stark but handsome one-page menu will turn your table into a blossom of shared dishes including the blissful wok-charred asparagus with foraged mushrooms and black bean sauce. It also included South American jimaca, which resemble water chestnuts and further demonstrate the restaurant’s international reach.

Watch out for the full moon margarita, and don’t tell mom I tried a $24 Rumpkin, Avery Brewing Co. brew.

And, oh yeah, a high-bred weed/dazzling IPA combo buzz is Uber affordable here—as in, aromatherapy-grade pot seems to be falling from the sky while pints of premium craft brews can be had for $3.50.

For more information about making your Denver trip happen go here. The Mile High Culture Pass is your ticket to ride Denver’s best attractions—$30 for three days or $52.80 (there are 5,280 feet in a mile, the Mile High City uses that number a lot) for five days.