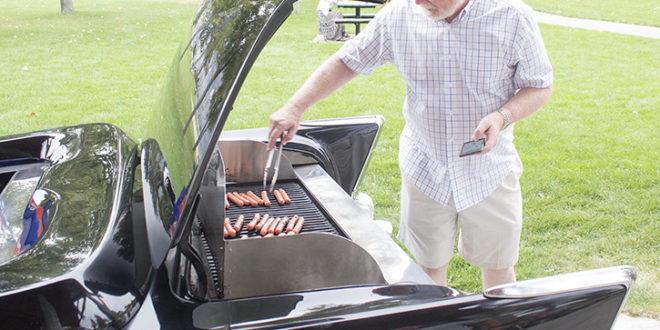 Dick Cannings is back from his Ride the Riding tour, with a new appreciation for the trail network linking the communities.

“It is such a beautiful riding,” said Cannings, MP for South Okanagan West Kootenay. “Right from Nakusp at the start, I was on trails and I was cycling with people.”

Cannings headed out from Nakusp on Aug. 24, arriving back in Penticton on Aug. 30 after putting in about 70 kilometres of riding most days.

“The first three days, I did over 70k each of those days, then the next 2 were a little less, then 60 something yesterday and 70 today,” said Cannings, who finished up the ride by hosting a barbecue.

“This is our first annual end of summer barbecue here in Penticton. It is just celebrating the end of summer,” said Cannings. “I will be going back to Ottawa and I am just happy to meet with people one last time before I go back.”

Cannings said he got to chat with a number of people on his ride, stopping in at cafés in communities along the way for coffee and meals.

“I met a lot of people on the road. I had people stopping their cars and talking to me, so it was a great way of doing it,” said Cannings, adding that he felt the ride was successful for the numbers of people he met.

The rookie MP said the idea for the ride came to him while he was campaigning last year, but his campaign manager suggested it would take too long with his already busy schedule.

“I had it in the back of my mind. I thought why not combine biking, which I like to do in the summer, with getting out and talking with people in the riding?” asked Cannings. “There are 41 communities in the riding and most of them are little. A lot of times, I just drive right by them as I am on my way to Nakusp, Castlegar, Trail or other places.”

Part of Cannings’ journey was on rail trails; old railway lines like the KVR that have been converted for cycling and walking.

“Those trails are such an important part of the local economy. For a place like Midway, Rock Creek or Slocan, a big part of their tourism comes from people cycling these rail trails,” said Cannings. “They are very keen on building that infrastructure and attracting more people.”

There are models around the world, he continued, where small towns have capitalized on such features and really come alive. He said more work needs to be done to enhance the resource.

“People come from Germany specifically to cycle the KVR and in a lot of places, the KVR is in really terrible condition,” said Cannings, concerned that tourists might go away disappointed, depending on their overall experience.

“I think  we should really work to make sure those trails are in great shape and take advantage of that,” he said.