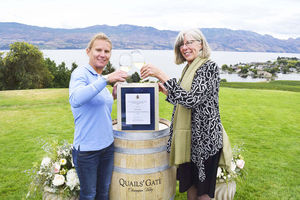 Nikki Callaway knew there was something exceptional about the Chardonnay grapes harvested in 2014.

“There’s something special about them every year,” said the Quails’ Gate winemaker.

“But 2014, in particular, the weather was perfect and the block (of vineyard) just across the street (from the winery on West Kelowna’s Boucherie Road) always produces beautiful fruit. With it, we were able to make a crisp, well-oaked wine.”

That wine, the 2014 Stewart Family Reserve Chardonnay, received its just reward Wednesday (Sep 7) when Lt.-Gov. Judith Guichon dropped by to present the vintage with the Lieutenant Governor’s Award of Excellence in British Columbia Wines.

The $35 Chardonnay was recently released for sale, so it should be available at most B.C. liquor stores as well as at the winery’s shop.

The 12 winning wines were first announced in June, but the actual ceremonies and trophy presentations are this week (Sept 7-9) as Guichon travels to each of the dozen wineries.

“Wine is such a wonderful value-added agricultural product that has led to wine tourism and on-site restaurants. Other agricultural sectors can learn from the wine industry when it comes to value-added.”

Guichon and her husband, cattle ranchers in the Nicola Valley, would like to see grass-fed B.C. beef specially labelled as such.

Such a product could be matched with B.C. wines and served at winery restaurants.

From Quails’ Gate, the lieutenant-governor headed to St. Hubertus in Kelowna and Ex Nihilo in Lake Country to hand out trophies and plaques.

On Friday (Sep 9), she finishes up by visiting Intersection, Hester Creek, Kismet, Gold Hill and Bordertown.

When then lieutenant-governor Iona Campagnolo introduced the awards in 2003, the wine industry in B.C. was much smaller and only 60 wines from 25 wineries were submitted.

Besides promoting B.C. wine, the awards give winning vintages entry into Government House, the lieutenant-governor’s residence in Victoria.

As the Queen’s representative in the province, the lieutenant-governor holds many functions at Government House, and serving award-winning B.C. wines to the international lineup of guests showcases the industry.

As well, the wines will likely be bought by consulates in Vancouver and Victoria to serve at events.

Thirty consuls general from various countries accompanied Guichon to the Okanagan to experience the area and buy wines.