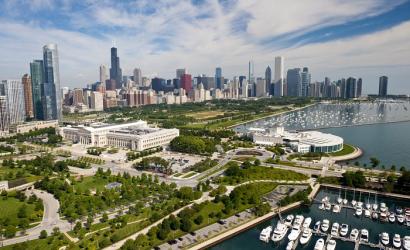 Mayor Rahm Emanuel has announced Chicago welcomed over 57.6 million visitors in 2018 – a growth of 4.3 per cent over the previous year, resulting in a new tourism record.

“When it comes to attracting tourists and business travellers, Chicago can go toe-to-toe with any city in the world,” Emanuel said.

“By continuing to set new tourism records and bring millions more people to Chicago every year, we are creating jobs and economic opportunities that reach every neighbourhood.”

Annual visitor projections released by Choose Chicago were fuelled by a growth of 4.4 per cent in domestic visitors and an increase of 2.9 per cent in overseas visitors.

“It’s encouraging to not only see growth, but to see the pace of growth increase,” said David Whitaker, president of Choose Chicago.

“The previous year, visitor volumes grew 2.7 per cent, so to see the pace improve with now a 4.3 per cent annual increase is a reflection of the momentum that Chicago is enjoying and the growing impact the tourism, meetings

The overall impact of the visitor industry continues to be demonstrated by a variety of key barometers.

Chicago tourism-related employment is estimated to have reached 150,616 jobs in 2018, an increase of 1.2 per cent.

The overall annual occupancy rate increased to 75.4 per cent for the year.

The growth in demand helped fuel an increase in the average daily room rate of 4.6 per cent, resulting in a reported 9.1 per cent rise in hotel revenues.

With this success and growth, Chicago hotels generated a record $140 million in city hotel tax revenues, resulting in an additional $11.7 million in tax collections to support city services.

“The diversity of our visitors continues to grow as we welcome more and more people both from around the US and increasingly around the world,” noted Whitaker.

“A great city to visit is born out of a city that is a great place to live, work and play.”