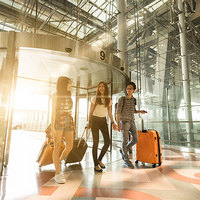 China made 10% of tourists visiting Africa in 2016

The massive influx of Chinese tourists to Africa has in the recent years made a buzz, and it is for all possible reasons. After seven consecutive years of annual double-digit growth in spending, China continues to lead global outbound travel, reaching US$ 261 billion of Chinese travelers’ expenditure in 2016, a 12% growth since 2012. Approximately 135 million Chinese outbound tourists travelled in 2016, out of which 10% were bound for Africa up from 3% in 2008.

As at the end of Q1/2016, China’s economy stood at an approximate $11.3 trillion, the second largest in the world just after the US with about $17trillion. However, while the US remains on top of the chart, the case is expected to be different by 2027 in terms of tourism spending and investment as well as in total travel & tourism GDP; as China overtakes the world giant.

According to Josephine Wawira, Global PR Assistant Jumia Travel, in Africa, various data has shown that Chinese tourists spend an average of 40% in excess of their European and American counterparts. Increasing Chinese investments in the continent (China’s total trade with Africa peaked at $222 billion by December 2014), involvement with African governments’ projects such as the construction of the recently launched Standard Gauge Railway in Kenya; remain among major factors that influence China’s appetite for Africa.

This, not to mention a highly tech savvy and adventurous generation of Chinese millennials with a comparatively high purchasing power. “Chinese millennial travelers are fueling the growth of global tourism as they seek new and fresh experiences,” states a report by Carat & Jing Travel on what’s influencing Chinese millennials. Other factors include ease of travel following the introduction of direct flights between China and several African countries such as South Africa, Ethiopia, and Kenya; which according the Kenya Tourism Board (KTB) saw a whopping 100,000 Chinese visitors in 2016. Less stringent visa restrictions for Chinese travelers to countries such as Morocco and Tunisia is also a big plus.

If the endlessly breathtaking destinations, wild safaris, comfortable weather to escape the massive heat waves in China are all anything to go by, then Africa can only expect stronger projections from this Asian country with a vast capital base. For instance, by having China as one of its outbound destinations, Africa’s leading online travel agency Jumia Travel is capitalizing on the trend by creating a link between China and the African market. “This helps us leverage on the diversity of operating on both the African and Chinese markets,” says Estelle Verdier, Jumia Travel COO. It is therefore up to the concerned stakeholders in the hospitality and tourism industries in Africa to gain momentum in meeting what seems to be an increasingly demanding Chinese tourism source market.