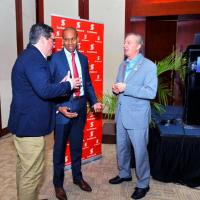 Announcing the results of the fourth annual CHTA Industry Performance and Outlook Study, Comito was bullish about the immediate future, indicating that 85 percent of the hotels surveyed expressed optimism about the year, citing a continuation of the positive performance many experienced in 2018.

“We are seeing high levels of investments in upgrades of existing hotels over the past three years, and the growth in new room inventory contributes to modest increases in room rates as the region’s product continues to expand and improve,” said Comito. “This is a considerable shift from what we were seeing four years ago and is expected to continue this year.”

Comito added that a healthier hotel sector is contributing to growth in employment, higher tax revenues for governments, and helping more hotels to realize a net profit. Eighty percent of responding hotels anticipate net profits as they finalize their 2018 books.

“A healthy hotel sector is paramount to economic growth. While every sector of our tourism economy is important, specifically cruise, marinas, and vacation home rentals, it is the hotel sector which has the greatest multiplier effect on economies. They continue to have the greatest impact on employment generation, spin-off businesses, new airlift, and tax revenue. We are pleased to see performance moving in this positive direction,” added Comito.

The tourism veteran said the CHTA survey will help the organization gain a better understanding of the state of the tourism economy, its outlook, and factors which could influence the sustained expansion of the region’s visitor industry.

The survey polled a representative sampling of hotels throughout the Caribbean looking at their 2018 performance and 2019 expectations. It examined areas such as employment levels, revenue, profits, capital spending, room occupancy, and rates as a basis for assessing the state of the tourism economy.

“While we are definitely upbeat about the performance of tourism in the region, we cannot rest on our laurels this year,” said Comito, who cautioned that changes in the global economy could adversely impact performance. “As we enjoy a very strong winter season, the industry should anticipate and plan for external factors which could curb growth in 2019.”

Caribbean Travel Marketplace 2019 was produced by CHTA in collaboration with co-hosts the Jamaica Hotel & Tourist Association, the Jamaica Tourist Board and the Jamaica Ministry of Tourism. It is the leading event in the Caribbean tourism industry where delegates from Caribbean countries meet with buyers from more than 20 markets.