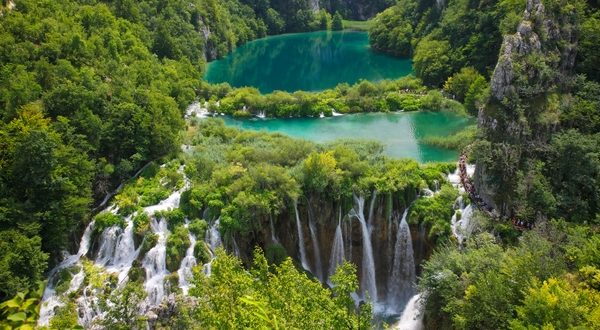 Croatia For More Than Game of Thrones Fans

So everybody’s traveling to Croatia to live out their Game of Thrones fantasies, descending upon the walls, staircases and forts of Dubrovnik like madness and pouring into the Fortress of Klis as if Daenerys was still storming Meereen.

All this GoT tourism is certainly helping put Croatia on the map and secure it a top place on the list of the world’s best destinations. Yet all the mania is lost on the nonfans. They have barely watched an episode let alone recognize the landmarks that appeared on the show.

It’s a good thing that Croatia’s about more than just fanboy/fangirl-ing it to one shooting location after another. This stunner of a country is teeming with incredible sights worth pulling over for: spectacular national parks, charming towns, elevating experiences and even quirky attractions you might find uncommon.

Here are a few of the best things you can do in this Adriatic Sea destination. Beyond Game of Thrones, that is.

A visit to Croatia is not complete without an exploration of its national parks. Start at its best known, Plitvice Lakes National Park next to the Bosnian border in central Croatia. This almost 300-square-kilometer wonderland is as picturesque as it gets with its chain of terraced lakes and cascading waterfalls.

Head south to Krka National Park, not far from the city of Sibenik, where more waterfalls abound, fringed by watermills and a monastery. And if there’s time, visit the archipelago of Kornati National Park to the west of Sibenik where limestone karsts, caves and uninhabited islands await.

For some time, Croatia was part of the Roman Empire, and Roman vestiges still pepper the country today. The grandest of them all is Diocletian’s Palace in the coastal city of Split. Ignore the GoT references and the meandering tourist, and focus instead on its exquisite details, grand gates and eerie passages.

If ruins are your thing, then you must not miss Salona, also in Dalmatia. Here, the skeletons of a Roman resort lay beautifully on a carpet of green. There’s an amphitheater, the Great Thermae, a cemetery basilica and a cathedral.

Better yet, avoid all the GoT mania altogether and head north to the Istrian peninsula where one of the best-preserved Roman amphitheaters, Pula Arena, draws travelers to lovely Pula. Or make a stop in the old Roman colony of Zadar where remains of a Forum lay.

Speaking of Istria, the pretty peninsula that sits on Croatia’s northwestern-most tip is exoticism steeped in a medieval air.

Red-roofed medieval towns sitting prettily on lush hilltops and sun-drenched coasts that jut out to sea seem to be Istria’s expertise, as are music, cuisine and culture. Hill towns to scratch off your list are Groznjan, Motovun, Labin and Hum, the smallest town in the world. Also, stop by the ruins of Pietrapelosa.

Then carve out some time to visit the coast. See the Church of St. Euphemia in Rovinj. Visit the Basilica of St. Euphrasius in Porec. Explore the streets of Pula.

You don’t necessarily have to hop off the beaten path to experience Croatia’s quirky side. Curiosities abound in the destination.

See the musical renderings of the Zadar Sea Organ along the Dalmatian Coast. Take your time, find a quiet spot and unwind to the melody of the sea.

Check out eerie World War II memorial sculptures like the sci-fi-looking installation called the Podgaric Monument in Berek, the Monument to the Detachment in the Brezovica Forest in Sisak and the Stone Flower in Jasenovac.

In Zagreb, visit the Museum of Broken Relationships, a bittersweet museum that explores the idea of love and loss.

There are more adventurous undertakings in Croatia than hopping from one island to another or going on a boat ride around Plitvice Lakes.

Make your way to the ethereal Blue Cave of Bisevo, go for a morning swim and be sure to take some photos. Or you can explore the creepy rooms and tunnels of Villa Rebar just outside Zagreb.

Whatever you do, you must carve out some time to visit the port town of Omis, a jumping off point to many outdoorsy pursuits in the Split-Dalmatia area. Besides hiking, zip lining and cycling, there are also opportunities for river rafting and canyoning.

Summon your inner social media influencer, and head for Hvar, the resort island not far from Split.

It’s famous for its port town of the same name, medieval fortresses, monasteries and beaches. But Instagrammers make their way here to mostly for its rolling lavender hills, which provide plenty of fabulous photo opportunities. Come during the summer. Better yet, join in on the festivities during the lavender festival in June.