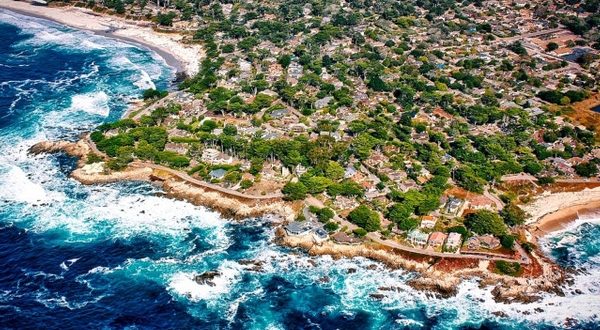 Curating Your Own Carmel by-the-Sea Experience

A California seaside town with a European feel, Carmel-by-the-Sea is a friendly place with 43 hotels, 900+ hotel rooms and no street addresses.

Straight out of Disneyland or maybe Gaudi’s Barcelona, this little city has cobblestone roads, inconsistent sidewalks, no streetlights and remarkable architecture. Though the town is small (one-square-mile, to be exact), it’s anything but lacking in things to see, eat, drink and explore.

As a 20-something traveler, Carmel might not be your first choice for a vacation destination in California. The town recently celebrated its 101st anniversary and is often promoted as a romantic, rustic vacation spot for an, ahem, riper age group.

Most inns are virtually untouched (not renovated or updated)—and look the same as they did when they opened a century or so ago. Nightlife is sleepy, to say the least, and few bars/restaurants stay open past 11 p.m. But a new wave is taking over Carmel, and the tiny town is leaning on local grapes (Monterey County), deep breathing and cultural affairs to shake things up for millennial visitors.

There are more than a few different ways to spend your vacation in Carmel-by-the-Sea.

Curate your own walking tour and take advantage of all types of tastings while learning about the stuff you’re ingesting and imbibing. There’s olive oil at Trio, honey at the newly opened Carmel Honey Company and wine options on every corner—with a Wine Tasting Passport, you’re entitled to one flight at 10 of 14 tasting rooms.

(Note: Don’t worry about over-drinking or eating. Sloping streets make walking in Carmel quite the workout, so you’ll burn those calories in no time.)

Catch a concert at the historically preserved, state-of-the-art Sunset Center. The former public school is home to the Monterey Symphony, Carmel Music Society, Carmel Bach Festival and has seen acts such as Jackson Browne, Rufus Wainwright and the Havana Cuba All-Stars.

Relish in Old Hollywood, even if just for lunch, at Cypress Inn, the dog-friendly inn co-owned by Doris Day.

Maybe you’d rather spot celebs, (and by “celebs” we mean one infamous American actor/musician and his sheep). Clint Eastwood—a longtime resident of Carmel and also former mayor—owns the Mission Ranch, a 31-room hotel with a piano bar and restaurant. Stop in for some tunes and a classic cocktail before or after a visit to the Carmel Mission, which dates back to the 18th century.

Feeling fancy? Get a high heel permit at the village’s City Hall (it’s quick and easy), which allows you to bypass Carmel’s bizarre, no-heels-over-2-inches law, so you can wobble down cobblestone streets in stilettos at your own risk.

Grab a bite at Affina Food and Wine. The restaurant, which opened just three years ago, boasts an open kitchen, reclaimed barn wood tables/bar, an extensive wine list (obviously) and a very charming, very knowledgeable French chef. Affina is also a stop on the Carmel Food Tour—worth booking if you want to try American and international cuisine at multiple restaurants in just a couple hours.

Book a three-day Mindful-by-the-Sea retreat or just pick up a mindfulness packet when checking in. Bi-monthly retreats are led by renowned instructor Dr. Rich Fernandez, include meditation by the beach and focus on wellness, the development of personal mindfulness practices and more. More Zen equals more brain space for fun.

Mingle with tourists and locals from all walks of life at La Playa Carmel. Every Sunday, the hotel hosts happy hour from 5:00 to 5:10 p.m. and, keeping with a tradition started by Howard “Bud” Allen, a Carmel native who purchased the inn many moons ago, drinks (beer, wine and cocktails) are just 10 cents each for those ten minutes—as long as you pay with dimes.

Unplug and get that old-fashioned socializing on. You never know who you’ll meet or what kinds of stories they’ll share with you.