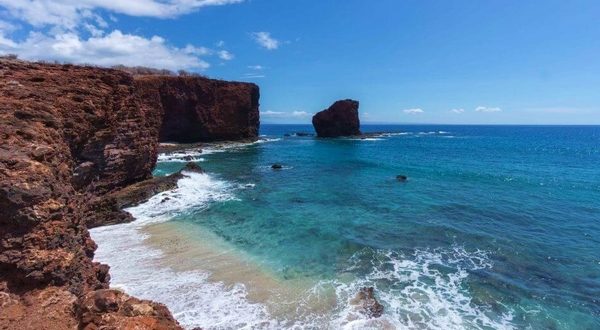 Once known as Hawaii’s Pineapple Island, Lanai is only nine miles offshore from Maui.

Yet it is unlike any other island in the Hawaiian archipelago.

Pineapple is no longer grown here, but the Lanai of today retains two distinctive flavors—one luxurious and upscale, the other wild, rugged and undeveloped. Which side visitors experience is highly dependent upon how much time is spent exploring the island.

Guaranteed, the adventure awaiting here is a mixture of the surreal and the spectacular.

On our recent trip to Maui, we boarded an Expeditions ferry for the short voyage to Lanai. We took the earliest one out of Lahaina to maximize our time; Following a fellow passenger’s advice, we sat on the starboard side.

From our ferry, we could see not only Maui as we departed and Lanai as we approached, but we were treated to stunning views of the towering sea cliffs of Molokai in the distance along with uninhabited Kahoolawe—the deserted Hawaiian island once used as a target by the U.S. military.

Lanai is only 13 miles wide and 18 miles long, but the best (and only way) to explore the island is by vehicle. We’d made previous arrangements for a rental so, once docked, we were off in our Jeep 4X4 to see what this place was all about. (The rental company provided us with a map with clear instructions on the dos and don’ts, which we’re glad we followed.)

The geographic and cultural center of the island is Lanai City, known by the locals as “central town.” (It’s really Lanai’s one and only town.)

Before heading out for our adventuresome day, we had breakfast at charming Blue Ginger Café, the official hangout spot of locals and one of the few breakfast places on the island. Bread is baked daily, the menu is a bit eclectic and food here is tasty.

But the real treat was listening to the happy smiling locals congregating on the sunny porch “talk story.” It’s a phrase used by Hawaiians to describe the passing of information verbally through stories—just like their ancient ancestors who did not possess a written language.

Sitting in on their conversations was utterly fascinating. Topics ranged from local gossip to tales of woodland ghosts and the unusual happenings at the historic Hotel Lanai in town that’s been welcoming guests since 1923.

Lanai City has a smattering of unique art galleries and one-of-a-kind shops with names like “Dis-N-Dat.” We just had to go in and check it out. Yes, the name fit the shop to a tee with its smattering of local goods and handicrafts.

Similarly, a stop at the Four Season’s Lodge at Koele is a must even though the resort is currently under renovation. Unique in the Hawaiian Islands, Koele is a retreat for the true outdoorsman. Nestled among lush greenery and pines, the estate resembles a grand country hunting-lodge and features spectacular gardens and fountains. Guests can indulge themselves with horseback riding, tennis, archery and even a clay shooting range.

Only 30 miles of roads in Lanai are paved, leaving the rest to be explored by four-wheel drive. Many of these unpaved trails traverse North Lanai.

As we headed up the eastern shore, we were surprised by the extensive wide-open wilderness and empty roads, where we didn’t see another vehicle for miles.

Also known as Shipwreck Beach, Kaiolohia is a windy 8-mile stretch of oceanfront sand on Lanai’s northern shore. We were cautioned by the rental car company not to drive on the sand near the beach once it began to feel soft. (Many rental car drivers have succumbed to the sinking sands here, waiting hours for towing services from the other end of the island.)

We listened to the advice, and did just fine, even if it required walking a few hundred more yards to the beach.

Shipwreck Beach is so-named for the numerous ships wrecked along its shallow, rocky channel. It is a bold testament to the island’s reputation as an unsafe harbor in a storm.

The rusting hull of a ghostly World War II oil tanker from the 1940s appeared before us, helplessly beached on Kaiolohia Bay’s coral reef. As we climbed over the rocks for better views, hundreds of black crabs seemed to come out of nowhere, scurrying over the rocks all around us. It was a bit unsettling at first, but fascinating nevertheless.

A haven for beachcombers due to the marvelous Nautilus shells found here, this strand also offers magnificent views of nearby Molokai and Maui. Swimming here, however, isn’t advised, due to its rough and turbulent waters.

After our beach visit, we made a stop at Keahiakawelo—also known as Lanai’s legendary Garden of the Gods.

Its mysterious lunar topography looked like nothing we’d ever seen before, with its massive boulders, rock towers, spires and formations formed by centuries of erosion. It’s not hard to imagine being a thousand different places other than Hawaii because the landscape here is so surreal.

According to Hawaiian lore, the Garden’s windswept features are the result of a contest between two priests (kahunas)—one who lived on Lanai, the other on nearby Molokai. They challenged one another to see who could keep a fire burning the longest. The kahuna from Lanai won but used up every piece of vegetation in the process, resulting in the barren moon-like terrain we see today.

Four-wheel drive is absolutely necessary to access Keahiakawelo as the road is unpaved and bumpy with deep ruts. Once there, visitors are rewarded with more stunning views of Molokai; Even Oahu is visible on a really clear day.

Just a half hour past Keahiakawelo and well worth the drive is magnificent secluded Polihua Beach. The locals told us the only footprints on the sand we’d likely see would be our own, and they were right.

Two large Honu, Hawaii’s green sea turtles were basking on the beach and largely ignored our temporary intrusion as we strolled past.

During the winter months, Polihua Beach is perfect for spotting humpback whales. The current here is dangerous for swimming, but walking the beach and taking in the immense beauty of this uninhabited region is unforgettable.

After our crazy adventures on the island’s wild and uninhabited north side, we were more than ready for some snorkeling and relaxation on the island’s more civilized and tranquil end.

Picking up some grab-and-go sandwiches and snacks, we headed to stunning Hulopo’e Bay, which offers some of the best snorkeling in all of Hawaii.

Large tide pools of volcanic rock at the eastern side of the bay were teeming with hermit crabs, starfish, sea urchins and myriad small, colorful fish. Spinner dolphins gave us a free show with their amazing acrobatics.

A 20-minute hike along the cliffs just outside the tide pools led us to Puu Pehe, known to the locals as Sweetheart Rock, and one of Lanai’s most iconic landmarks.

Legend has it that a heartbroken warrior jumped to his death from the 80-foot summit rising from the sea. The warrior had captured a beautiful princess from the island of Maui. So no one else could have her, he hid her in a sea cave. During a ferocious storm, the cave flooded and the princess drowned. Stricken with grief, the warrior took his own life.

As we viewed this incredible towering rock, it was easy to believe the legend is somehow true.

Boarding the ferry for our return to Maui, we recalled the magnificence and mysteries of our very eventful day in Lanai. As the sun disappeared on the horizon, we were glad to have checked another Hawaiian island off our list.

Hawaiian melodies mingling with the warm breezes blowing through our hair made it a perfect ending.