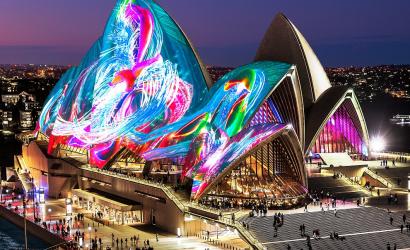 Light installations are beginning to be finalised throughout the Harbour City in preparation for the upcoming launch of Vivid Sydney, the largest festival of light, music and ideas in the southern Hemisphere.

With just two weeks until Lights On – on Friday, May 24th – artists and event staff are working on the transport and final assembly of the 50 or so light features and projections.

New South Wales minister for tourism, Stuart Ayres, said it was the perfect time for visitors to start planning their Vivid Sydney itineraries.

“Anticipation is building for the eleventh annual Vivid Sydney and now there are just two weeks until the magic moment of Lights On,” Ayres said.

“Vivid Sydney is a truly significant event for NSW.

“The economic impact of last year’s event was almost $173 million in tourism related spending from 2.25 million attendees across the 23 days.

“Last year Vivid Sydney saw a record 185,887 travel packages sold to domestic and international visitors which was a 37 per cent increase on 2017.

“The interest in Vivid Sydney has grown at an exponential rate. In 2011 there were less than 500,000 attendees – the NSW Liberal government has facilitated a 370 per cent rise in visitors to the festival.

“In 2011 Vivid Sydney generated $6 million for the NSW economy and last year this was $173 million – huge growth and a big boost for the local economy.”

There is still time for visitors to book tickets for popular Vivid Music and Vivid Ideas events, and guests are encouraged to explore some of the unique aspects of the festival as well as the ever-popular Light Walk.

Also today, details have been revealed of Samsung’s Electric Playground – a technology-enabled playground celebrating light, sound and imagination – and the Samsung Galaxy Studio.

Both immersive, interactive spaces use advanced mobile technology to enhance the Vivid Sydney experience for festival guests of all ages, allowing them to explore their inner child.

Vivid Sydney will run until June 15th throughout Sydney.

For more information, including tickets, maps and guides, guests are invited to visit the official website.