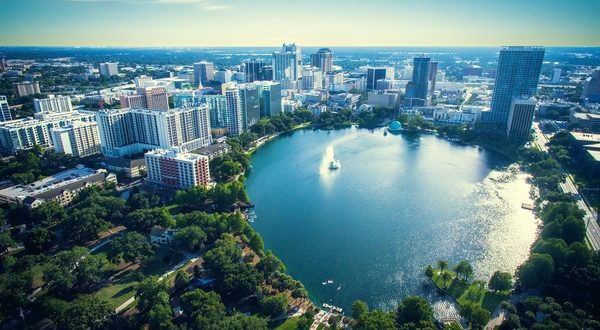 Go Beyond the Theme Parks in Orlando

Orlando resident and local travel expert Kevin Chippindale knows why people travel to the city— it’s the theme parks. In fact, Chippindale has developed an app that lets visitors discover all there is to know about visiting Orlando’s famed amusement parks.

However, while the theme parks are amazing, Chippindale really wants visitors to go beyond Disney World and Universal and get to know the real Orlando. His app, Orlando Attractions, goes far beyond the amusement parks and delves deep into the heart of Orlando and it’s lesser-known attractions and activities.

Here are his top 10 local picks that include attractions you may never have heard of but are worth discovering—and no theme parks:

You may want to bring a bicycle. Chippindale says the very popular West Orange Trail runs for 22 miles and passes through nearby Winter Garden’s historic downtown. A great place for a lunch stop is the Crooked Can Brewery and the adjoining Plant St. Market has all sorts of natural and organic food options.

You may not be aware, but Orlando is surrounded by cowboy country and every Saturday night there is a full-on red white and blue rodeo at Westgate River Ranch, Chippindale says.It is one of the largest dude ranches east of the Mississipi and visitors can enjoy trick riding, bull riding, calf roping and barrel racing in a 1,200-seat arena–not to mention dozens of great outdoorsy activities for the whole family.

Chippindale says visitors can escape “touristville” and head downtown to Lake Eola Park and the nearby Thornton Park neighborhood where they can take a stroll, admire the fountain, ride a swan boat and then hit the surrounding brick streets where there are a lot of cafes, restaurants, and bars.

SoccerChippindale recommends treating yourself to a game at Orlando City’s new stadium with the only purpose-built “standing section” in the league. There’s a great atmosphere and it’s a short stroll downtown to more fun after the full-time whistle blows, he says.

Another off-the-beaten-path idea is to head toward Apopka, a tranquil 7,000-acre oasis. Visitors can take a dip in the natural springs, canoe down the Wekiva River or tube down Rock Springs Run. It’s great on a hot summer afternoon, says Chippendale. There’s also hiking, biking and horse riding–not to mention a healthy population of black bears.

Who knew that Florida has the second biggest population of bald eagles next to Alaska? A thrilling way to check out the local bird and wildlife is to take an airboat ride out onto the headwaters of the Everglades, recommends Chippindale. It will mess up your hair, but make your day. There are plenty of safe and reliable operators to choose from.

Go for the Beer

At an out of the way location across the tracks from the railway station, Orlando Brewing just celebrated 10 years of producing some of Florida’s finest organic suds. This friendly hangout is one of the stops on the Central Florida Ale Trail–17 stops and counting as you criss-cross the area with stops in nearby Sanford, Clermont, Debary, Deland, Winter Garden and Winter Park.

Park Avenue has a ribbon of European cafe culture running through its heart. The people watching is the main event, closely followed by long lunches, forays into dozens of unique stores and quite possibly some music in the park, Chippindale says. The farmers market on a Saturday is a great way to start your day. There’s a terrific boat tour of the area’s chain of lakes and a cluster of world-class museums.

Head for the Hills

Mount Dora sits on one of the few high spots we have here in Central Florida overlooking the Harris chain of lakes, notes Chippindale.

The event calendar features a nonstop list of festivals and events from art to music to food and the rest. Take a Segway tour or a steam train ride or just browse the antique stores and hit the pickleball courts.

Rolling Down the River

The 310-mile-long St. Johns River runs right through central Florida and was a key element when it came to transporting goods and people around the state in the late 19th century. Fast forward to 2018 and you can still get a feel for the ‘lazy river’ lifestyle onboard the Barbara Lee, a replica sternwheeler operated by the St. Johns Rivership company. Offering lunch and dinner cruises, the ship docks at the Lake Monroe Marina in downtown Sanford, which is also home to a burgeoning downtown full of great bars and eateries.