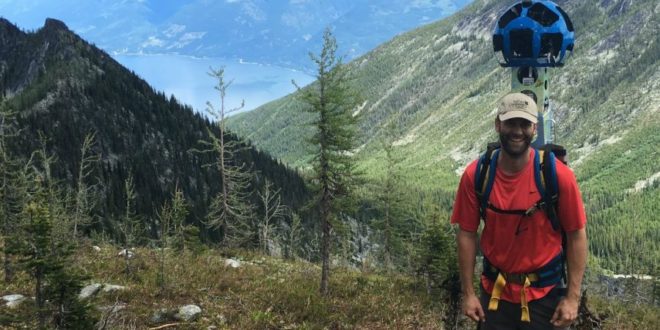 Sasquatch should be a little nervous.

Like Google cars caught your neighbours watering the lawn (or worse) for Street View, the technology giant is heading into Canada’s most remote wilderness areas on the backs of some Nature Conservancy of Canada employees — literally.

The NCC has just embarked on its second year using the Google Trekker program. NCC staffers plan to hike through 14 conservation areas across Canada this summer wearing 360-degree cameras mounted atop backpacks.

“It’s about giving people a chance to see those hidden places, to see the beauty and nature that is really behind the work that we do,” Neilson said.

The 50-pound cameras have 15 lenses and take a photo every 2 1/2 seconds. It looks like a soccer ball sitting atop a pole. The data will then be transferred to Google, and the tech giant will post it online. It will take months to process all the data, however.

“I was really hoping we’d see a grizzly bear from a nice, safe distance, but we didn’t,” said Lesley Neilson, the NCC’s communications director for B.C.

They chose the 55,000-hectare wilderness area because it offers dramatic views. Neilson and colleague Adrian Leslie landed on a mountain ridge in a helicopter before hiking down to an alpine lake.

“You need to have a good image,” Neilson said. “It also can’t be too dark.”

Darkwoods—located in the Selkirk Mountains near Nelson—is home to rare sub-alpine larch trees, the endangered white bark pine and one of the remaining mountain cariboo herds in the world.

“It’s going to be spectacular,” Neilson said of the photos.

Next year, the program will head into the Okangan’s Sage and Sparrow Conservation Area in the South Okanagan southwest of Osoyoos.

It’s also a migration corridor for wildlife, including birds and bats. Within its 3,400 acres are 50 species at risk including rare canyon bats (they’re the size of a Hershey’s kiss). It’s also a burrowing owl reintroduction site.

NCC has also done mapping at Coyote Lake in Alberta and Fairy Hill in Saskatchewan. Other scheduled tours will be held in the Quebec Laurentians, the Lower Bay of Fundy in New Brunswick, St. Peter’s Harbour and Murray Harbour on Prince Edward Island, Gaff Point and Pugwash River Estuary in Nova Scotia, Codroy Valley and Maddox Cove in Newfoundland and Labrador and Carden Alvar in Ontario.