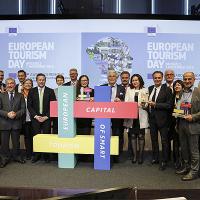 Pia Pakarinen, Helsinki’s Deputy Mayor, Alain Galliano, Vice-President of Lyon Metropole and Jean-Michel Daclin, President of ONLYLYON Tourism and Congress, received European Capitals of Smart Tourism 2019 trophies on behalf of their cities and were delighted that long-term efforts in creating smart environments for tourists in their cities have been recognised at EU-level.

In praise of the winners, Commissioner Elzbieta Bienkowska, responsible for Internal Market, Industry, Entrepreneurship and SMEs, stated: “I congratulate Helsinki and Lyon for the outstanding solutions that they put in place to make tourism in their cities smart and innovative. Our objective at EU level is to foster the sustainable development of tourism by showcasing innovative solutions from EU cities in tourism. We believe that the European Capital of Smart Tourism initiative will help to establish a framework of exchange of good practices between European cities, including learning from each other and networking, creating opportunities for cooperation and new partnerships. Tourism is important for the EU economy so we all need to work together more effectively to be more competitive and grow in a sustainable way”.

Pia Pakarinen, Helsinki’s Deputy Mayor commented: “We very much appreciate the opportunity to be the first European Capital of Smart Tourism. The first ones always set the bar and we aim high”.

David Kimelfeld, President of Lyon Metropole, proud of his city’s achievement said in a video message: “The exchange of good ideas has always moved us forward in Europe and that is why we are so pleased to receive this Award and to have the opportunity to share with other European cities a few of our ideas about smart tourism. We hope with our initiatives we can also inspire other cities!”

The European Capital of Smart Tourism is a new EU initiative, based on a proposal from the European Parliament, which secured its funding for 2018 – 2019 through a Preparatory Action. The initiative seeks to strengthen tourism-generated innovative development in EU cities and their surroundings, increase their attractiveness as well as strengthen economic growth and job creation. It also aims to establish a framework for the exchange of best practices between cities participating in the contest, create opportunities for cooperation and new partnerships.

In order to become a European Capital of Smart Tourism, a city needed to demonstrate exemplary achievements as a tourism destination in implementing innovative and intelligent solutions in all four award categories: accessibility, sustainability, digitalisation, cultural heritage and creativity. It also needed to convince the European Jury about its suitability to act as role model for other burgeoning smart tourism destinations.

Cities of more than 100.000 inhabitants were eligible in the first edition of this competition. 38 cities from 19 EU Member States applied, but Helsinki and Lyon stood out for their innovative tourism measures and the impressive programme of activities they have put together to celebrate their achievements.

Helsinki and Lyon have been awarded with promotional videos, exhibition at European Tourism Day and purpose-built giant sculptures which will be installed in prominent locations in the two cities. During 2019 both Capitals will benefit also from promotional actions at EU level.

To celebrate their success, Helsinki and Lyon have planned an exciting schedule of activities for 2019. For example, Helsinki will be launching a smart city guidance pilot scheme, making use of collaborative work with businesses and digital tools to create a smarter way to guide people in the city. Helsinki will organise a workshop with other European cities on smart tourism and will hold the World Tourism Cities Federation’s annual global summit and trade fair.

Lyon’s representatives will be travelling the globe for shows, press meetings and special events to inform new audiences about the city’s smart opportunities. These activities will be supplemented by Lyon’s 26,000 strong network of ambassadors. The city is also launching its “World Travel Influencer Meetings” and is taking part in the Global Sustainability Programme.