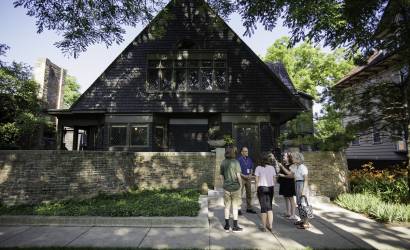 A new tourism trail showcasing some of Frank Lloyd Wright’s ground-breaking work has been launched in Illinois by the Illinois Office of Tourism.

As one of America’s greatest architects, Frank Lloyd Wright spent the first 20 years of his career in the state.

The self-guided architectural adventure features 13 Wright-designed buildings that are open to the public.

Stops along the new trail include Oak Park, home to the world’s largest collection of Wright-designed buildings.

From this summer, official Frank Lloyd Wright Trail road signs will be displayed across Illinois to highlight the trail and direct visitors.

The first itinerary will guide visitors from Chicago & Oak Park to Rockford with stops along the way in Geneva, Hampshire and Belvidere, covering 110 miles.

The second trip itinerary begins in Chicago & Oak Park and continues to Springfield with stops in Kankakee, Dwight and Springfield, approximately 240 miles.

Each itinerary features unique and local restaurants and attractions focusing on Illinois history and architecture.

“The new trail celebrates Frank Lloyd Wright history and his connection to Illinois, allowing tourists from around the world to discover the work of Frank Lloyd Wright, one of America’s greatest architects,” said Cory Jobe, director of the Illinois Office of Tourism.

Wright believed in designing structures that were in complete harmony with humanity and its surroundings.

Known as the Prairie style, Wright’s ground-breaking ideas ignited a design revolution and made Illinois an epicentre of pioneering architecture that exists to this day.