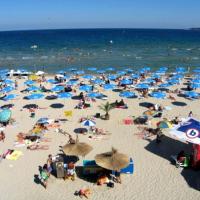 BERLIN – With five per cent more international trips, outbound travel from the Americas has shown solid growth in 2018 with a plus of 5 per cent. In contrast to the previous year, where North American growth exceeded Latin America, the first eight months of 2018 reflected the contrary. While North American outbound travel increased by four per cent, Latin America was twice as strong with eight per cent more international trips. Looking at 2019, the latest results of the World Travel Monitor by IPK International point to an uplift due to stronger growth in North America.

Europe remains growth driver for North American outbound travel
Overall, North America showed solid increases with a plus of four per cent in international travel during the first eight months of this year, which was in line with the forecasts of last year’s World Travel Monitor®. Despite lower growth rates compared to last year, Europe remained a growth driver. Trips by North Americas to Europe increased by eight per cent during the first eight months of 2018. Among the destinations, benefiting most from these increases were Spain and Italy, while trips to the UK stagnated. Trips to Asia grew solidly with a plus of five per cent, while inner-American travel rose by three per cent.

The strong growth of North American outbound travel was evenly distributed between holidays, visits to friends and relatives (VFRs) as well as business trips. While business trips underperformed worldwide, North America showed opposing developments with a six per cent increase. However, as in other parts of world, this growth was due to an increase of promotable business trips (MICE), while traditional business trips continued on a downward trend.

Within the holiday segment, growth distribution was also quite evenly distributed. Cruises reported the strongest increase of eight per cent. Tour holidays increased by five per cent, city trips by four per cent and sun & beach holidays by three per cent. Overall, the average length of outbound trips by North Americans decreased slightly, while spending was one per cent higher.

Looking ahead, an uplift is expected for North American outbound travel in 2019, with IPK’s Travel Confidence Index forecasting eight per cent growth for next year.

Inner-regional travel booming in Latin America
Latin America outperformed North America during the first eight months of the year with eight per cent more international trips. One of the key influencing factors was high growth in the Mexican outbound travel market, which declined last year but recovered strongly between January and August. The main reason for this turnaround was an increase in visits to the US, which dropped in 2017 but picked up strongly again.

Compared to North America, where trips to Europe remained the growth driver, Latin Americans mainly headed to destinations within the Americas. According to World Travel Monitor® figures, inner-regional travel by Latin Americans increased by 13 per cent. Europe reported solid growth rates of five per cent, while Asia received two per cent more visitors from Latin America.

Holidays were the key contributing factor for the growth of outbound trips by Latin Americans, with an increase of ten per cent. Business trips also grew strongly, rising by nine per cent. The reason for this were promotable business trips (with a plus of 12 per cent), and not traditional business trips (down one per cent). Visits to friends and relatives (VFR) recovered with a plus of three per cent compared to the declines during the same period last year. “This is due to increases of Mexican outbound trips, which tend to have a higher share of VFR.” explained Juan Alberto Garcia, consultant at IPK International.

Looking at the different holiday types, city trips grew strongly in the Latin American market and gained 18 per cent. Further strong increases were recorded for sun & beach holidays with a plus of 15 per cent, following declines during the same period last year. Cruises also reported similar growth rates, although this segment only accounts for a very small share of the total holiday market. Tour holidays, while recovering worldwide, were below average in the Latin American market with a growth rate of 3 per cent. In terms of spending, Latin Americans spent slightly less, while the average length of stay increased by three per cent.

With Latin America registering strong growth in the first eight months of the year, the outlook for 2019 is also very positive. According to the IPK Travel Confidence Index, Latin American outbound travel is expected to grow by 8 per cent next year.

”Cruises and city tours are the main growth drivers of the travel markets in the Americas. Outbound travel from South America to the US has displayed unusually high growth. This may be proof that, despite President Trump’s best efforts, he has as yet been unable to make the country any less attractive”, said Martin Buck, Senior Vice President, Travel & Logistics, Messe Berlin.

Additional information on specific topics regarding World Travel Monitor® data from IPK International will be published soon by ITB Berlin. Conclusive travel trend findings for 2018 will also be presented by the end of the year.

Rolf Freitag, CEO of IPK International, will present the findings of the World Travel Monitor for 2018 at the ITB Future Day during the ITB Berlin Convention as well as forecasts for 2019. The World Travel Monitor® is based on the results of representative interviews with more than 500,000 people in over 60 global travel markets. It has been published for more than 20 years and is recognised as the most widescale continuous survey of global travel trends.

Previous A Tour of a Hong Kong Wet Market: Not for the Faint of Heart
Next South Africa’s Enchanting Winelands