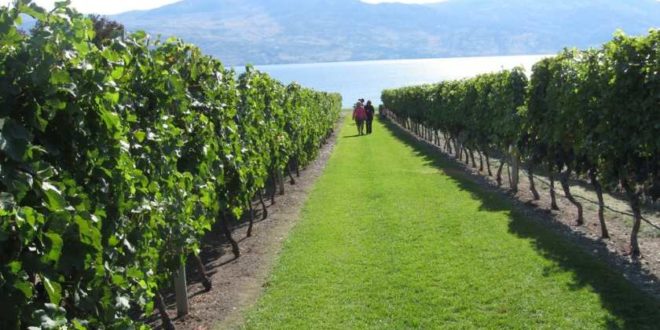 Gray Monk Winery owners George and Trudy Heiss and their family started growing grapes and selling wine overlooking the north end of Okanagan Lake back in 1976, and for more than 25 years it was the only winery in the region.

During their initial search for vineyard land, the advice was to look for a place where you could grow peaches and apples because that meant you likely could grow grapes. It was good advice for the times.

Being far from the traditional Okanagan Valley winery trail didn’t make for an easy start, but being the first (or last) winery on the way to or from the Prairies turned out to be a boon for business.

In the early days of any nascent wine country, wineries usually set up near each other, and close to a large population base — strength in numbers and a ready nearby market ruled the thinking of entrepreneurs. Much of that has changed with the Internet and modern transportation. The vineyard is king and in a highly mobile world, wine country has been allowed to become more country than ever. You could argue the more remote the better.

Moderately close to Kelowna, a little under five hours from Vancouver, Lake Country is hardly isolated, but global warming has turned a once marginal grape growing area into one full of huge potential.

Since the arrival of Gray Monk, Lake Country has grown into a viable community of nearly 12,000 souls. Add to that the vast advances in viticulture and winemaking, and the cool, rolling hillsides that hug north Okanagan Lake are now the target of terroir hunters.

It’s taken some time but there are wineries following in the footsteps of the pioneering Heiss family. Arrowleaf Cellars is now 14 years old. Ex Nihilo Vineyards opened in 2008, Intrigue Wines in 2009, followed by 50th Parallel Estate in 2013, Blind Tiger Vineyards in 2015, and this month, The Chase Wines.

The O’Rourke family, owners of Chase, will also add a boutique winery at Carr’s Landing near the northern edge of Lake Country, sometime over the next two years.

At 74 years old, Dennis O’Rourke is in a hurry to get his winery up and running and he is moving ahead at a Manhattan-like pace. The goal: top-of-the-line, super premium wines led by Chardonnay and Pinot Noir.

Lake Country is a cool (temperature) sub-region, a growing advantage in an ever-warming world, and while it gets about 50 per cent more rain than Osoyoos at the far southern edge of the Okanagan Valley, it is only a modest 12 inches (300 mm) a year.

It’s the proximity to Okanagan Lake that moderates the temperatures, and the steep slopes provide excellent air drainage staving off killer frosts. The soils are an attractive mix of clay, gravel, and some limestone.

Add all that up, and get out your chequebook, and you should be able to grow some impressive Riesling, Chardonnay, Pinot Noir, Merlot and maybe even Cabernet Franc. It’s a very attractive group of grapes that if done right could fuel a beautiful, small, high-end, sub-appellation 15 minutes from Kelowna Airport.

Lake Country is unofficial sub-appellation for the moment. We need to start delineating and naming these valuable pieces of dirt before another subdivision is built, and we need to get to work finding out exactly what can be grown to turn out wines of the highest calibre.

It’s going to take less talk and more science, education and research to ensure the health of the next generation of B.C. wine.