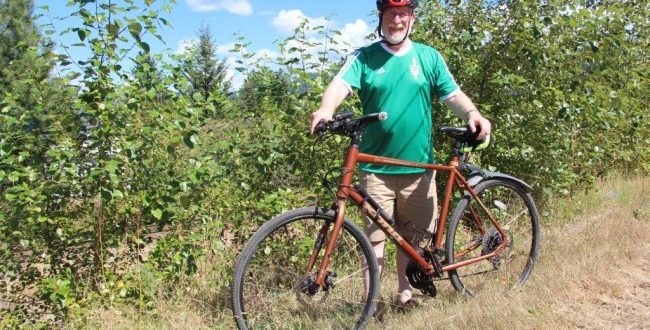 Member of Parliament (MP) Richard Cannings will be touring the electoral district of South Okanagan-West Kootenay (SOWK) by bicycle this week to get a different perspective on the people he represents.

His trip is called “Ride the Riding.” The word “riding” is an informal term for electoral district.

“I love getting out on my bike and before I got into politics, I was out on my bike most days trying to get 10 or 20 kilometres in to stay fit,” Cannings said Friday.

He’ll be inviting constituents to cycle with him on some trails that have been developed on abandoned railway lines or to chat with him when he stops at restaurants and coffee shops along the way.

The NDP MP will be starting out this Wednesday in Nakusp, and is scheduled to pass through Osoyoos, Oliver and Okanagan Falls on Tuesday, Aug. 30, finishing in Penticton the same day.

In Osoyoos, he will stop at Jojo’s Café for breakfast between 7 and 8 a.m., before cycling from the Road 22 kiosk at 9 a.m. along the International Hike and Bike Trail next to the canal.

He’ll have coffee at Medici’s in Oliver from 10:30 to 11 a.m., when he will cycle from Lion’s Park along the Oliver river trail to Highway 97.

“I thought about doing it during the (election) campaign, but it just wasn’t feasible,” said Cannings. “It’s too slow. So I put it in the back of my mind saying we should do a ‘Ride the Riding’ this summer.”

As well as meeting constituents along the way, Cannings also hopes to bring attention to the hiking and biking trails that have been developed on old railway lines.

“That’s another one of the things I would really like to accomplish in this term is to try to move on some of the initiatives on beautiful rail trails that we have in this riding,” said Cannings. “The Thompson Okanagan Tourism Association (TOTA) has made it one of their priorities and it’s certainly a priority in pretty much every community I go into that’s along one of them.”

Besides meeting people and promoting the trails, his third motivation is to stay in shape.

Cannings says he tries to cycle or walk when he travels around downtown Ottawa, although he admits he stops short of being one of the hardy Ottawa winter cyclists who commute with winter tires through several feet of snow.

“I respect them,” he said, adding that he doesn’t have the proper tires.

Cannings says he often sets out cycling from his downtown Ottawa apartment at 6:30 a.m., encountering a “barrage of people cycling” along Ottawa’s riverside bike trails.

He believes he’s the only MP who cycles from his office in the Confederation Building, up the hill to Centre Block for votes in the House of Commons.

Cannings says his tour of the riding will also involve some cycling on roads, but for safety reasons, he’s only inviting people to accompany him on the trail portions.

And, he acknowledges that he’ll “be doing a bit of cheating” on some of the steeper portions, getting a ride up to Nancy Greene Summit as well as to the top of Anarchist Summit.

His full itinerary is on his website at: www.richardcannings.ndp.ca.