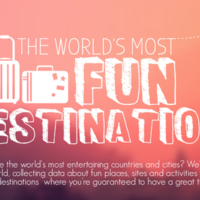 MrGamez: Netherlands is the world’s most fun destination

MrGamez has researched the top destinations in the world for vacations and ranked them based on 12 individual metrics such as a number of theatres, museums, and casinos and Prague emerged as the best city, while the Netherlands has been listed as the top country for fun and entertainment.

What Makes a Destination Fun
The research looked at various factors, including a number of museums, sports stadiums, festivals per year and national attractions. The company researched how many of each of these ‘fun factors’ each destination had to offer. To make the comparison fair across destinations of vastly different sizes, the overall amount was adjusted to a ‘per square km’ figure before the final ranking was calculated.`

With the most entertaining experiences, these top five countries represent the best places around the world for an exciting and enjoyable trip:

Escape to Prague
With 72 escape rooms – more than any other city – Prague has truly embraced the escape craze. While cities such as London and New York can boast the highest amounts of many other attractions, Prague packs a huge amount into a small space, meaning you’re never far from some entertainment in The City of a Hundred Spires.